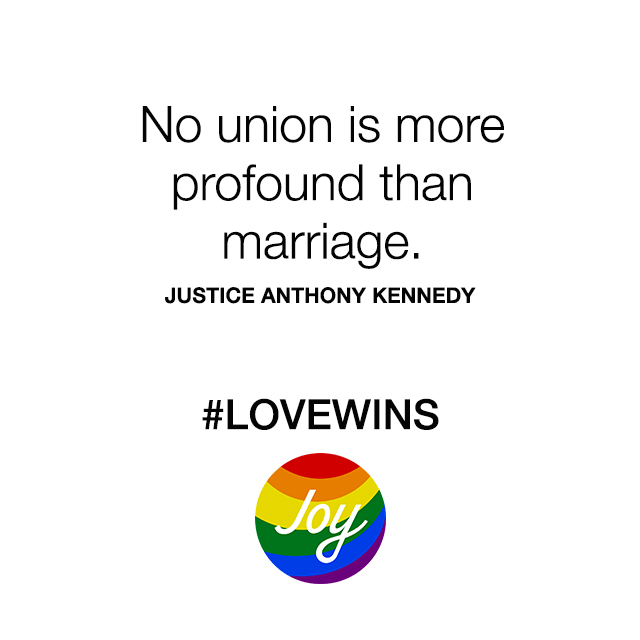 June 26, 2015 is a historic day for love. Today, the Supreme Court voted 5-to-4 that the Constitution guarantees all individuals the right to same-sex marriage.

In one of the most eloquent majority rulings ever written, Justice Anthony M. Kennedy wrote a statement that captures everything beautiful about marriage:

“No longer may this liberty be denied. No union is more profound than marriage, for it embodies the highest ideals of love, fidelity, devotion, sacrifice and family. In forming a marital union, two people become something greater than once they were.”

This is exactly why the team at Joy does what we do. We believe in marriage as a force that unites people and creates community. We believe that everybody deserves love. And we believe that while wedding vows last a few minutes, the process of two people coming together and committing to one another is an action that creates a ripple effect and brings together the families and friends of all parties involved for a lifetime.

We can’t wait to share the details on what we are building and how Joy will make weddings better. (And don’t worry, that time is coming!) But in the meantime, we want to say a huge “THANK YOU” to the following members of the Supreme Court of the United States:

And “THANK YOU” to everybody who fought for this, who wrote their legislators and who supported marriage equality. We’ll go back to staring at our Facebook feeds, crying tears of joy, and celebrating love. (Oh, and coding. Lots and lots of coding.)

Aubrey Bach is a writer based out of Seattle. She is a recovering Diet Coke addict who was raised on the mean streets of Seattle. At weddings, Aubrey is an enthusiastic but terrible dancer and has a knack for making friends with whoever is refilling the wine.

What the Obamas’ Relationship Taught Us About Love