Wedding Gift Traditions Around the World 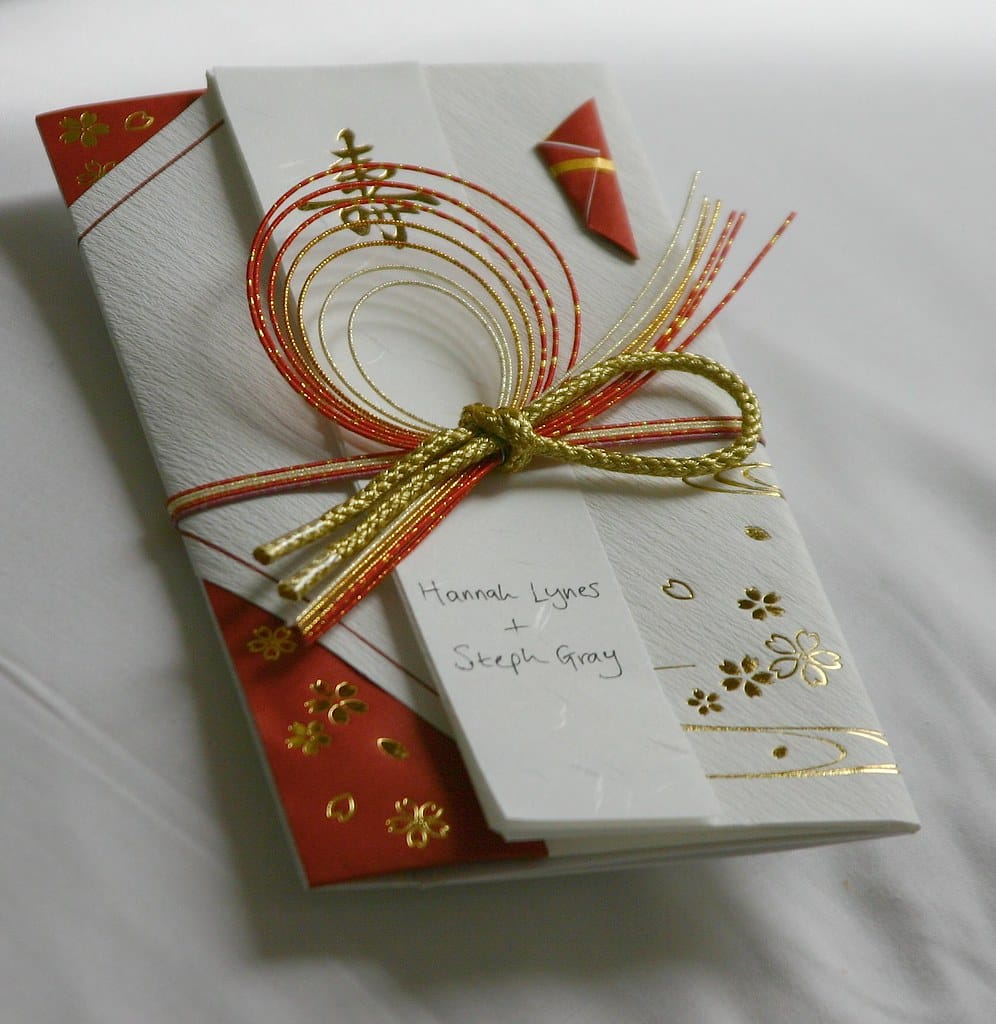 Love is as universal a feeling as hunger. But just as cultures around the world are vast and diverse, so too are the traditions and expectations that fall within them — and the giving and receiving of wedding gifts is no exception. After all, offering a gift at a wedding is a gesture that recognizes the symbolic importance of this special day and union, one that transcends geography, time, and space.

In the United States, most American wedding guests feel more comfortable giving gifts they can physically wrap and hold, even though giving money has grown more popular in recent years with the emergence of cash registry sites. Think traditional retail items like crystal vases and decanter sets, kitchen appliances, or personalized decor, as opposed to sending cash or funding an experience, like a honeymoon. In fact, according to a 2018 NerdWallet survey, 52 percent of Americans believe that asking for money in lieu of gifts is tacky and unbecoming.

Generally, wedding gifts are by no means required or expected in North America. But if guests choose to give to the newlyweds, the amount they spend should align with their personal budget before all else. “At the end of the day,” according CNBC’s The Wedding Economy, “wedding gifts are meant to honor the couple and thank them for including you…”

But is this the case with the rest of the world? Certainly not. In fact, cash giving is common, and oftentimes expected, in most every country except the US. Which goes to show that while no one-size-fits-all exists when it comes to wedding gifts, the gesture itself is rooted in, and dependent on, the culture in which it exists.

Aside from the US, here are the wedding gift traditions of the world’s top 5 most culturally influential countries from U.S. News & World Report’s Cultural Influence Rankings. These rankings reflect the countries that are trendsetters in the areas of food, fashion, and easy living — trends that have been absorbed by other cultures and become part of the wider global conversation. 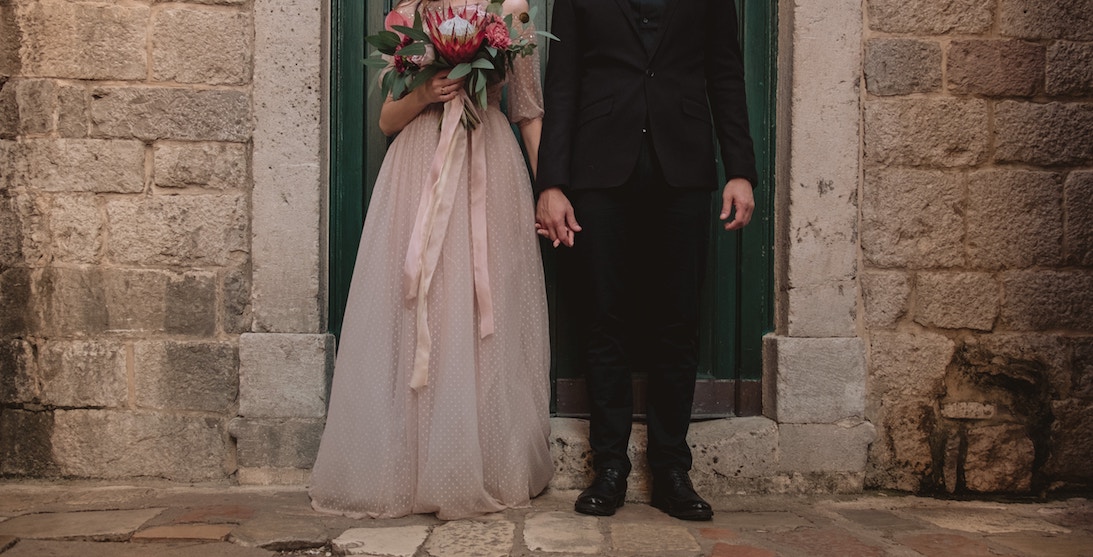 In Italian weddings, which are often rich in symbolism and tradition, guests are expected to extend gifts to the newlyweds — but not just any ordinary gift. Rather, it should reflect the community standing of the families. In other words, the more well-respected a family, the more extravagant the gift.

It’s also considered tacky to purchase an item that was on sale because it won’t be well-received by any of the parties. Because giving in an Italian wedding is a way to show respect to the bride and groom, and their respective families, personalized gifts or elegant items are always favored. And if guests are unable to purchase a suitable gift — for whatever reason, financial or otherwise — it’s best they decline the invitation altogether.

But the gifting doesn’t stop there. In traditional Italian weddings, brides carry la borsa — or a satin bag — during the reception, and guests place envelopes of cash in it, usually between $100 and $400, if they want a dance with the bride or to help the newlyweds with future arrangements such as a house or vacation. 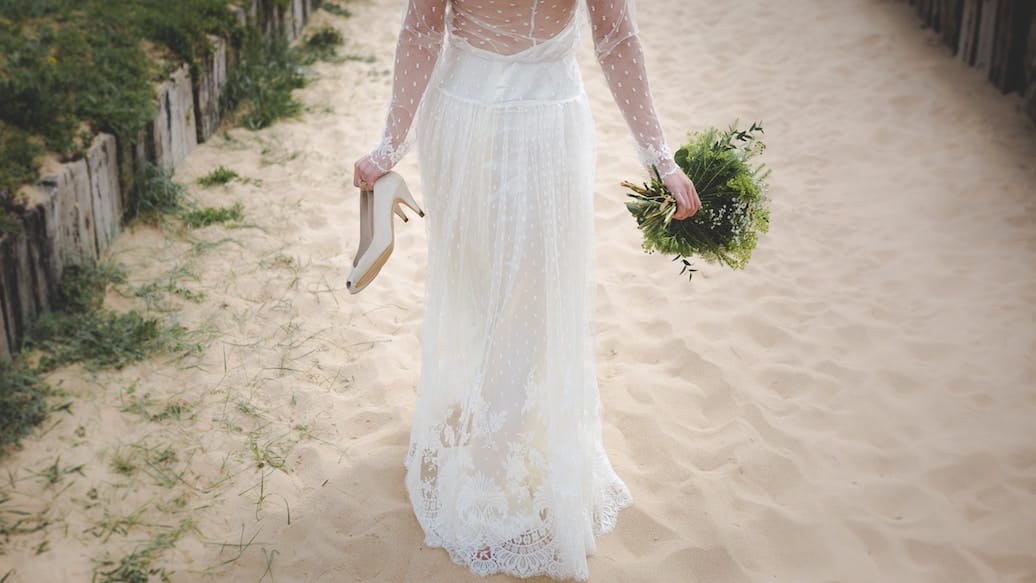 In the country that has the city of love and romance, French couples don’t usually feel comfortable asking for specific gifts, “so almost everyone gives the newlyweds cash.” Guests can look for a pot commun — or common pot for donations — at the wedding reception where they can place a check or a congratulatory card.

In the event the couple does have a list de mariage — or wedding registry — vintage French linen is one delightful option to give as a guest. According to Chez Pluie, a French international resource guide, linen “was traditionally given to . . . newlyweds inside their marriage armoire.” It also gets better with every wash, meaning the more it’s used the softer it becomes, making it a practical and thoughtful gift that’ll be used by the couple for many years to come. 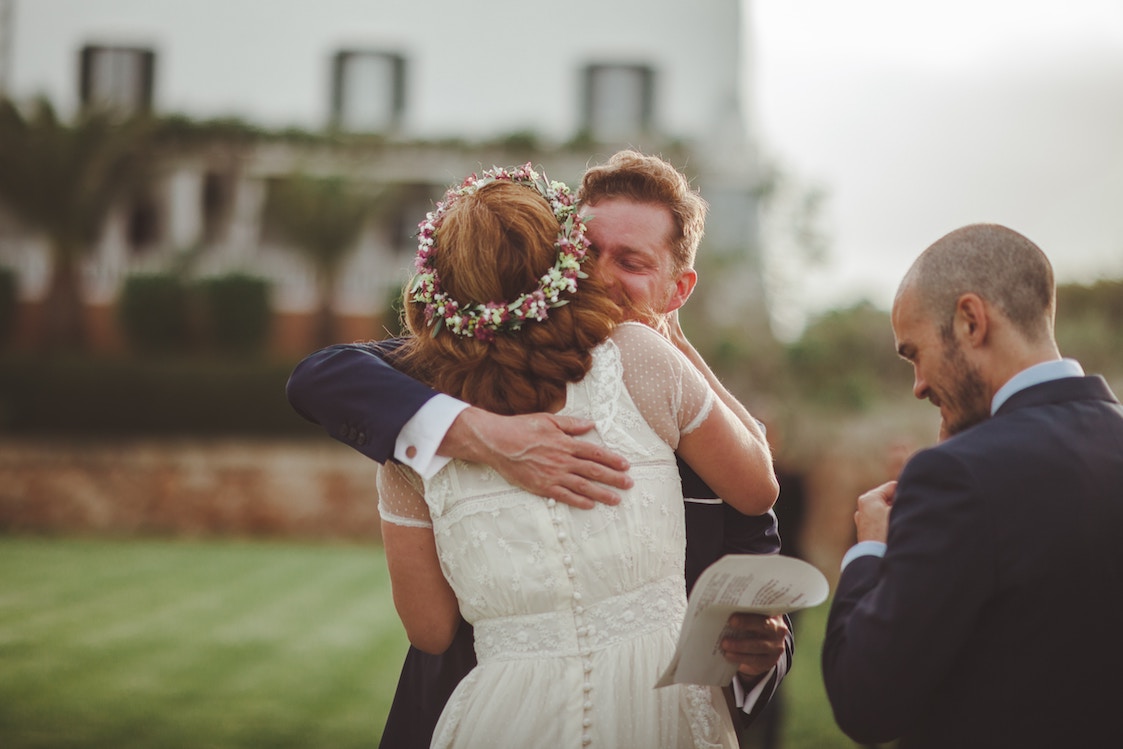 When it comes to hard cash, Spain is no different from other European countries that prefer this model. According to The Local, couples usually provide their bank information on the wedding invitation, which is generally considered an etiquette no-no in the US. Guests can then transfer cash or deposit a check, enough to at least cover the cost of their reception meal, and include a short congratulatory message with their name.

“The minimum is 100 euros per person,” reports The Telegraph, “[and] the daughter of a friend might get a little bit more than that, [while] a niece would get significantly more.”

Another common Spanish tradition, during the banquete de bodas — or the wedding feast/reception — is for guests to approach the head table and offer the newlyweds a gift as a thank you for being invited to their wedding. 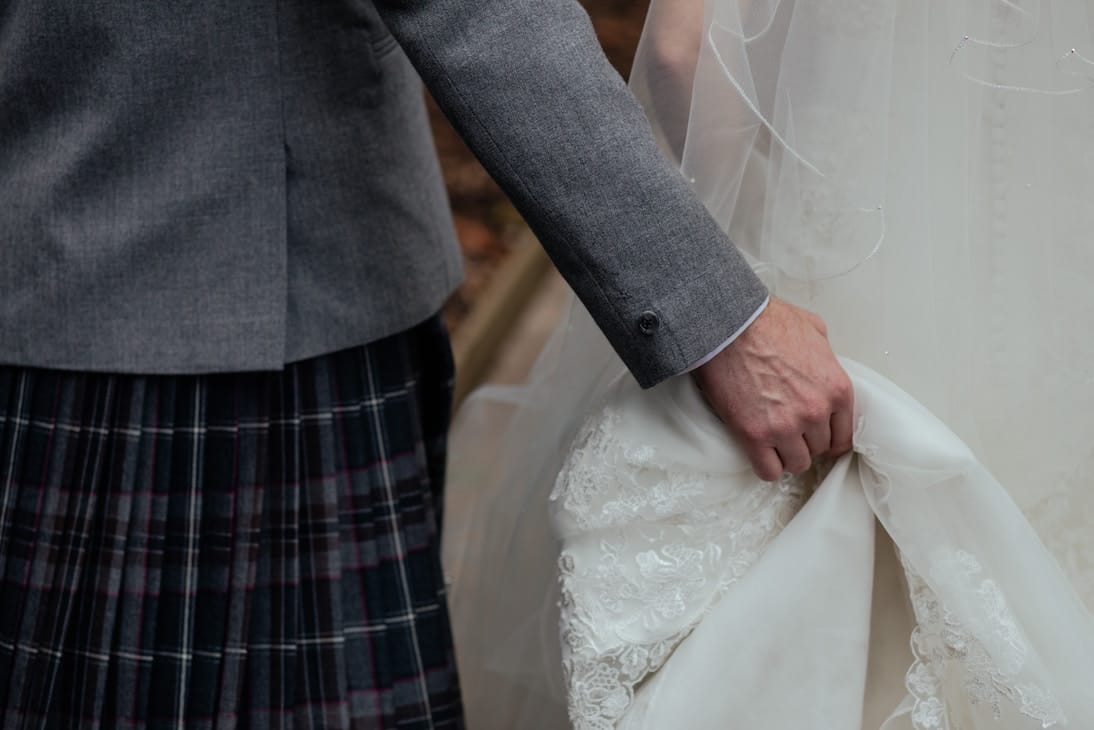 For guests invited to a British wedding ceremony, “it’s the pit of bad manners not to give a gift” — even if the couple insists they don’t want one or guests have to travel a long way, according to The London Economic.

But what kind of gift is acceptable in British culture? Traditionally, it’s not polite for couples to specify their gift preferences on an invitation, but as more and more people in the UK get married later in life, it’s preferable that they clarify their expectations for guests.

Because perception and manners is emphasized in British culture, guests shouldn’t spend too much or too little on a gift. A good rule of thumb is for guests to consider what they would spend on a night out and base their gift on that parameter. Whether it’s a cash gift to fund the couple’s honeymoon, or a more traditional retail item, British etiquette states that guests should give the gift on the day of the wedding or a few days prior.

Hitched, a top digital wedding planner in the UK, emphasizes a sentiment that is common in American culture: Guests should not be tempted to spend more than what they can afford — whether it’s cash or a traditional gift — because at the end of the day, the couple cares more about their guests’ presence as opposed to how much they can give. In other words, it’s not uncalled-for or a sign of disrespect to the newlyweds or their families if guests don’t give enough, like it is in Italy. 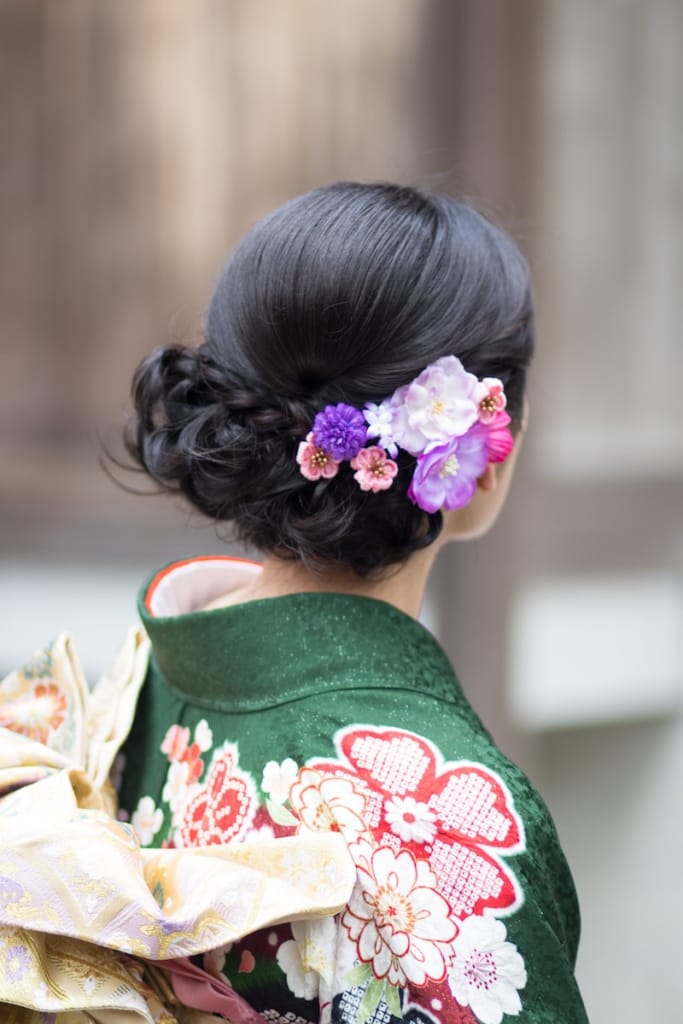 In Japan, and in many other Asian countries, goshugi (ご祝儀) — or money gift — is the tradition and the norm at weddings, stemming from a long list of unspoken rules.

Guests bring special “celebration envelopes” filled with money, and the amount is based on the giver’s social status — for example, a boss can sometimes be expected to give more than a coworker. Women may give less because they are expected to pay for makeup, dress, hair, and accessories.

While exact amounts can also vary based on guests’ personal or financial means and their relationship to the couple, “on average $300 is a good amount for a single person who is not especially close,” which equals about 30,000 yen. For invited relatives, by blood or by law, the amount given should be between 50,000 to 100,000 yen. Guests are also expected to avoid giving cash in even numbers because “the couple may think you wish them to split.”

Because cash is seen as a guest’s contribution to paying for the wedding itself, emphasizes Japan Info, “it is [also] important that the envelope and money . . . [is] new, and not dirty or folded.” This can be remedied by a quick visit to the bank.

Weddings are a global celebration of customs and social norms, of beliefs and expectations, and of history and ancestry — and the giving and receiving of gifts on this special day is a part of the equation.

No matter where you live in the world or the culture you’re accustomed to, try sampling the traditions that resonate with you here and incorporate them into your own wedding planning — and expectations.

Let them shape your perception of what is acceptable and what is not, why some traditions have changed and others have persisted, and determine for yourself what is right for you, your spouse, and your guests.

Amanda Hanna is a fictionist, non-fictionist, poet, and Chicago native. Her work has been featured in Wolf-PAC, Starcity, Crain's Chicago Business, Slag Glass City, LitCity312, and elsewhere. Follow her at theamandahanna.com.

Honeymoon Fund Ideas: Here’s How to Get Started

What Type of Wedding Registry is Right for You?

The Best Barware for Your Wedding Registry

The Best Mixers for Your Wedding Registry