The 15 Best Places to Propose in New York City

If you’re ready to ask the most important question of your life and want to ensure the backdrop for your marriage proposal is a fusion of history, culture, and classic romance, look no further than New York City. This famed metropolis has been the launching pad for many of the world’s legendary love stories and offers a plethora of proposal locations that attract a wide range of tastes. Whether you’re hoping for a dreamy outdoor proposal pulled out of the silver screen, a grand public gesture that’s sure to attract a crowd, or a simple setting that allows for the magnitude of your question to shine, the largest city in the US just might be the answer. We’ve rounded up 15 of the best places to propose in New York City to spur your creativity, solidify your plans for the big ask, and commence the next exciting phase you’ll share with your partner. 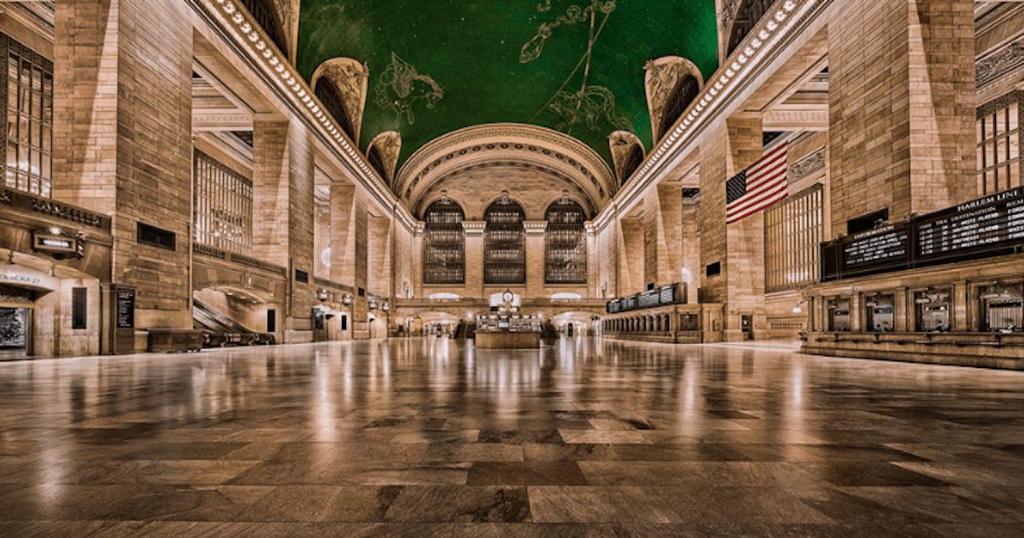 It doesn’t get much more chick flick than a bold, romantic gesture in New York City’s Grand Central Terminal. If you don’t mind an audience, drop to your knee in the center of the terminal and pop open that ring box. For an added surprise after the big moment, reveal secretly purchased train tickets to a romantic place. This will likely be quite a spectacle, so make sure you have someone on photo and video duty. 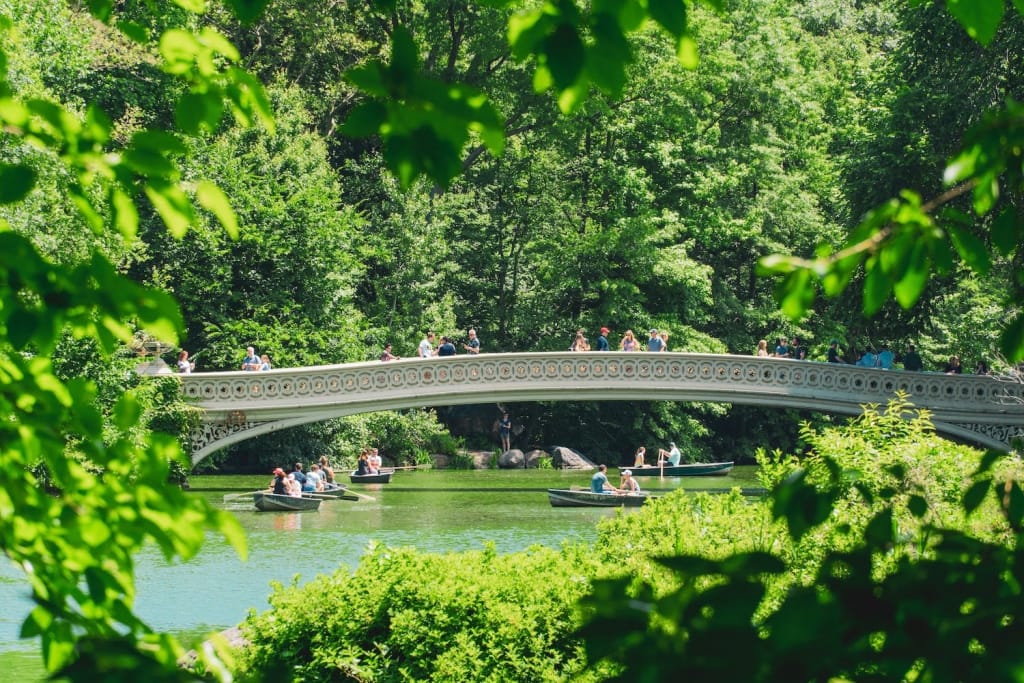 One of the most magical locations in Manhattan, Central Park Lake has been featured in many acclaimed films and is a quintessential backdrop to your NYC proposal. If you don’t want to mess with oars while you’re trying to propose, book a gondola at Loeb Boathouse. To make the moment dazzle, give the boat host a bottle of champagne and glasses on the down-low, so they can pull them out after you hear that resounding yes. 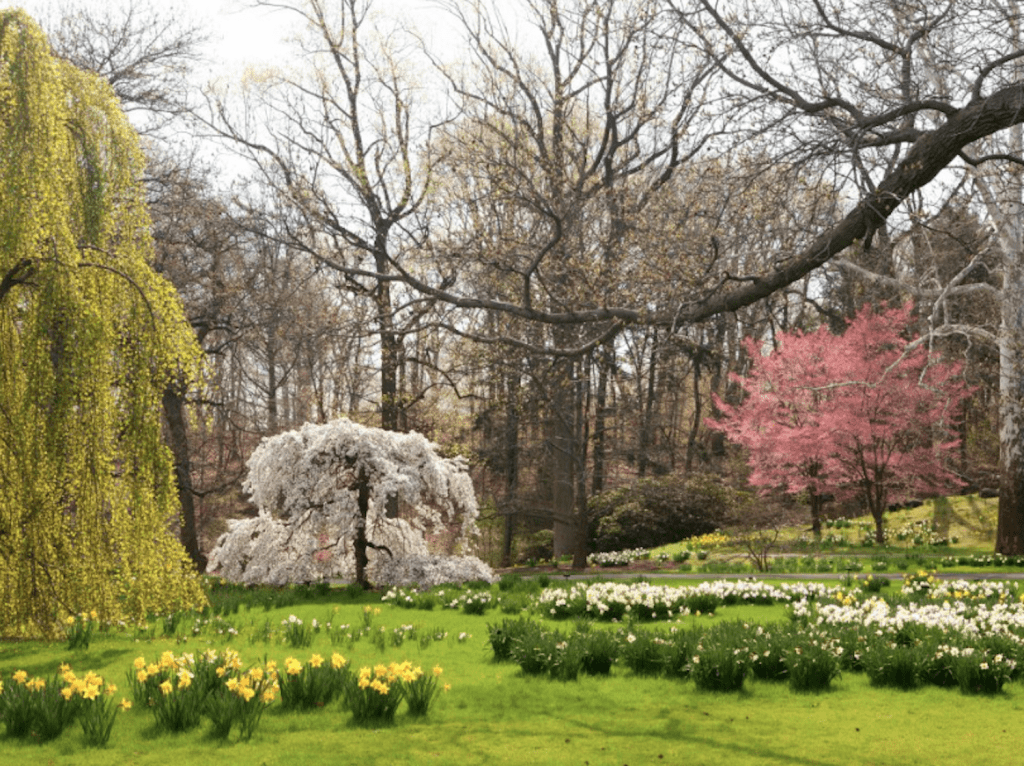 The lush, 250-acre landscape of New York Botanical Garden offers plenty of space, beauty, and romantic spots to pop the question. While there’s no bad place to propose marriage among the blooms, waterways, and arbors of the garden, our favorite proposal areas include the Water Lilies and Lotuses, Perennial Garden, Cherries area, and Rose Garden. Be prepared to guide your love to the spot by going on a reconnaissance mission a few days before the big day to map out a plan.

4. Top of the Empire State Building 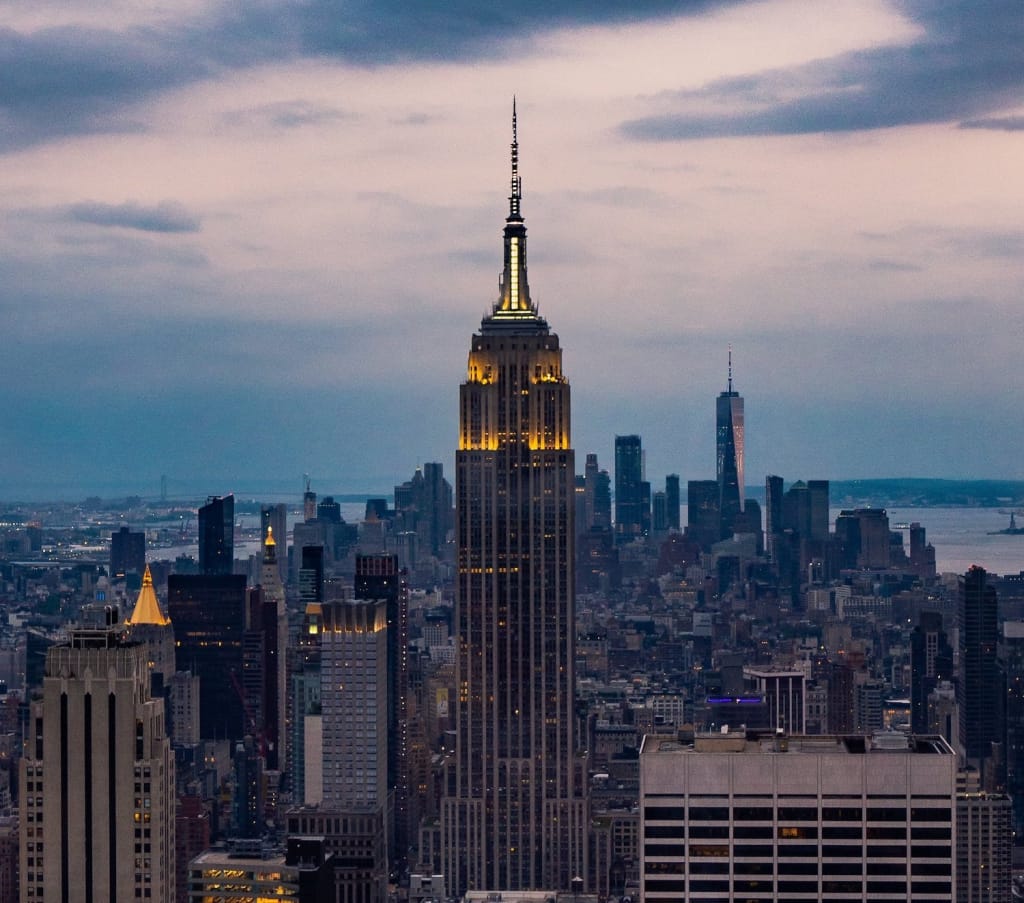 As you ask the ultimate question, enjoy the most spectacular views of the city at this famous proposal spot perched 1,250 feet above the Big Apple. If you’re not keen on the idea of waiting an hour or more to get your turn at the top during tourist season, spend the extra moolah for an Express Pass. And if you want a more private proposal, whisk your almost-fiancé to the 102nd floor after a romantic dinner, as the Empire State Building is open until 2 am. 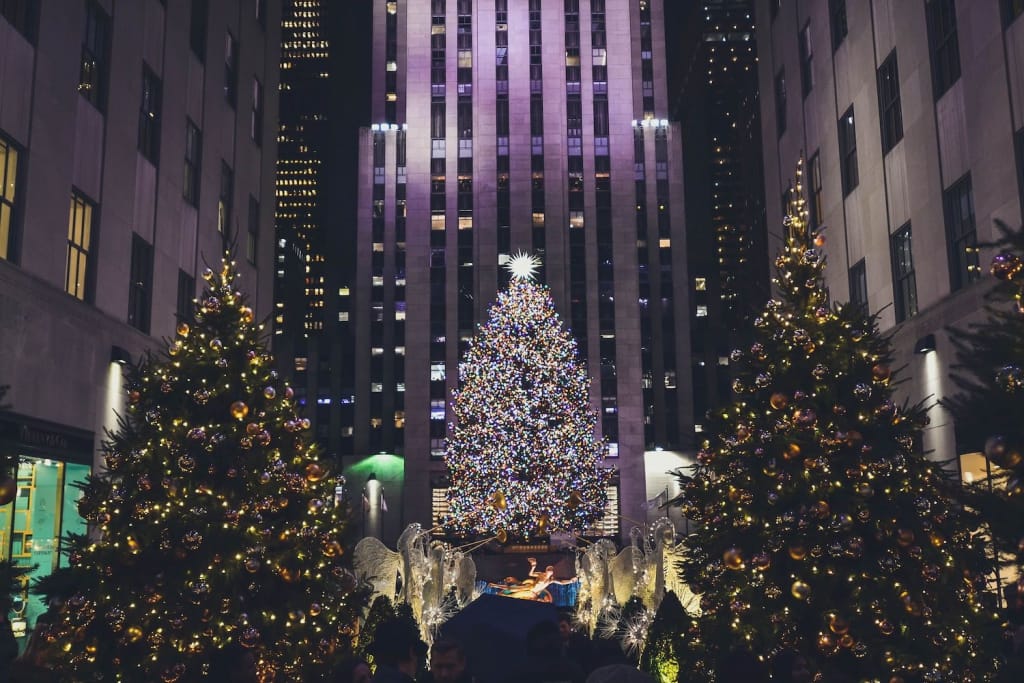 We can’t think of a more classic holiday proposal setting than beneath the 100-foot Christmas tree at Rockefeller Center, which has been featured in memorable scenes of yuletide classics like Home Alone and Elf. As your partner says yes, their tears of joy will sparkle beneath the 30,000 twinkle lights and massive Swarovski crystal star, adding to the magical moment. To celebrate your future together (and defrost your fingers), make the short walk to La Maison du Chocolat and indulge in the acclaimed hot chocolate. 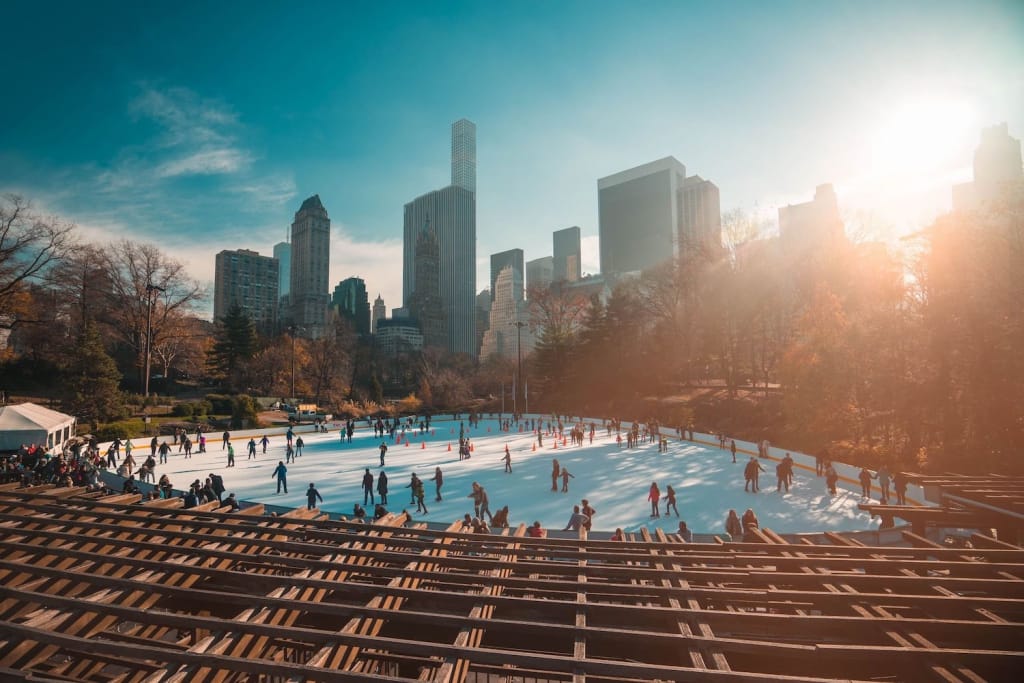 Another proposal gem in Central Park, Wollman Rink features a backdrop of stunning architecture and towering arbors by day and the glimmer of city lights by night, making it one of the best places to propose in NYC. Take advantage of this magnificent outdoor proposal spot—that’s been entertaining locals and tourists since 1949—by taking a few spins around the rink with your other half before leading them to the center and dropping to your knee. If you’re not an ice skating whiz, you can book private lessons and maybe even get the instructor to help you find the perfect moment to propose. And because competitive skaters can often be seen spinning here, it can be a mesmerizing setting for a proposal even if you never set foot on the ice. 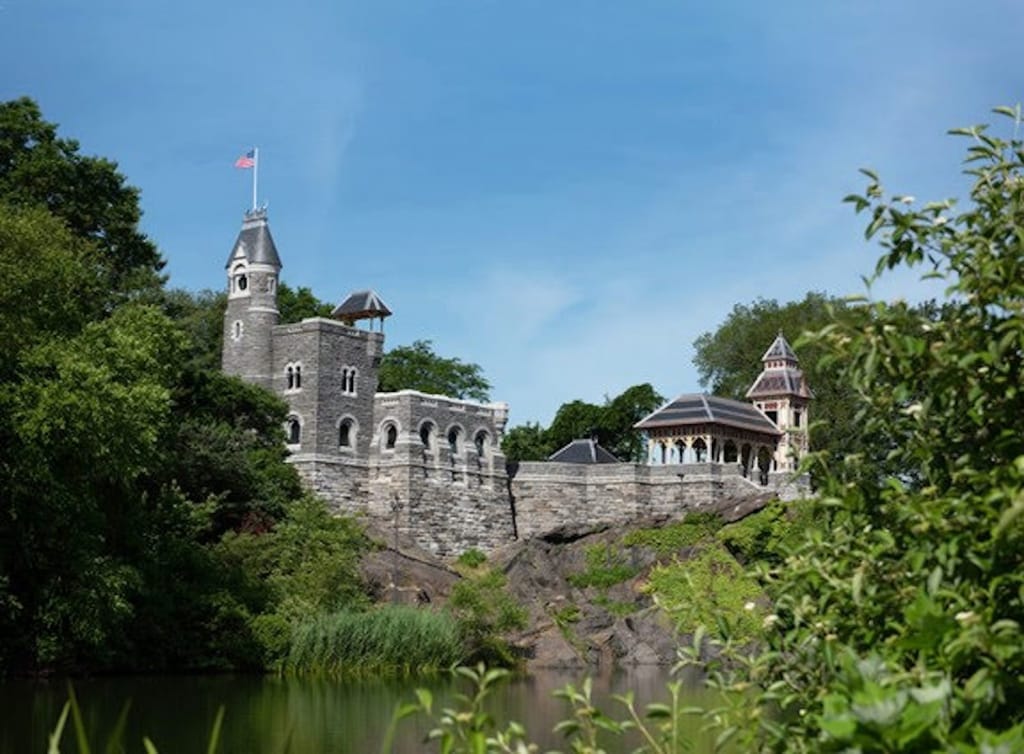 For those hoping to create a storybook proposal, Belvedere Castle‘s stone façade, grand turrets, and panoramic views of Central Park is the perfect setting. A miniature castle designed to be a fantastical focal point, it’s a prime location for taking in the whole park. Appropriately, Belvedere means beautiful view in Italian, and to fully utilize that view, head to the terrace. 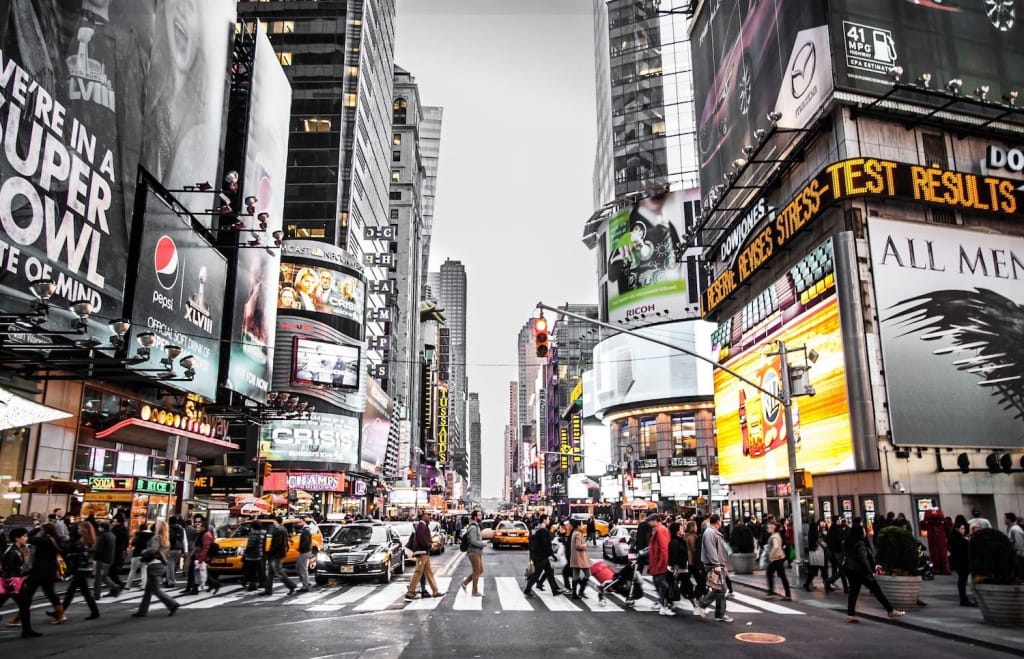 It doesn’t get more “New York” than Times Square which is why it’s one of the most frequented settings for proposing marriage. But you can score originality points by going beyond a verbal ask and renting space on one of the many digital billboards to post your momentous question. Enjoy a post-proposal dinner celebration at nearby Carmine’s Italian Restaurant or Havana Central Restaurant and Bar. 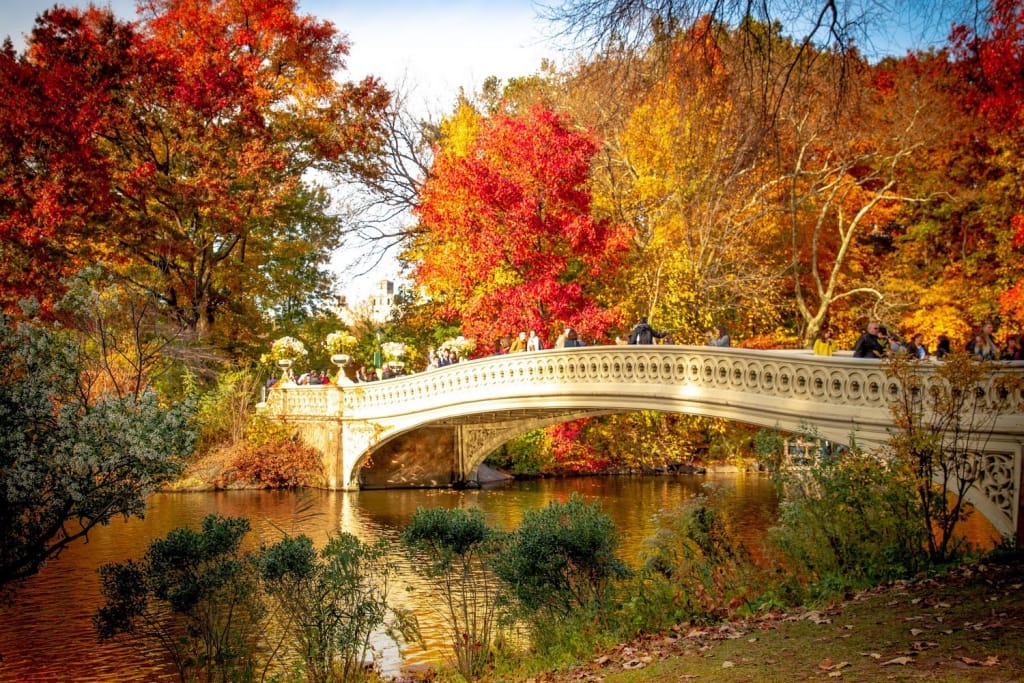 Another Central Park gem, Bow Bridge attracts lovers from all corners of the world with its romantic Classical Greek design and the captivating reflection in the tranquil water beneath it. Made from cast iron and ipe, a South American hardwood that turns a rich, deep red in rain, this 60-foot long bridge is a charming site for a proposal. A spectacular setting any time of year, Bow Bridge is especially stunning in the fall. 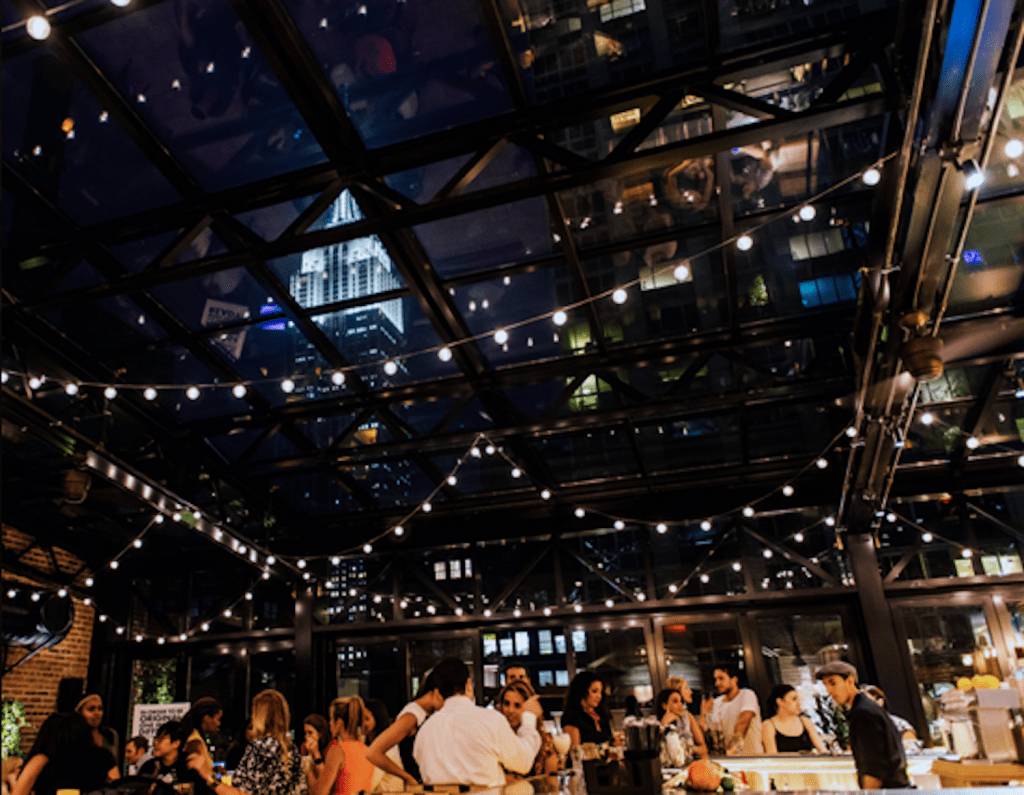 Located in Midtown, Refinery Rooftop looks out on the Manhattan skyline and attracts many of the most in-vogue locals (some who’ve actually been in Vogue), making it one of the best places to propose in New York City. With a combination of chic outdoor seating, twinkle lights, and a cocktail list created by In Good Company mixologists, this is a perfect proposal place if you and your girlfriend or boyfriend like to be on-trend. 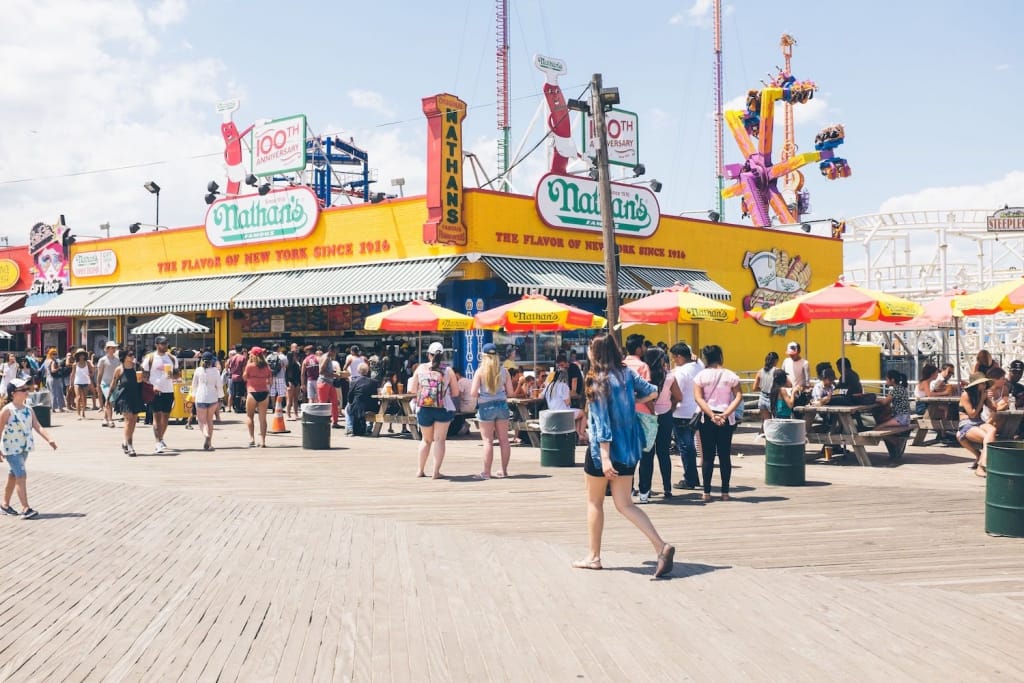 Relaxed couples with an affinity for carnival rides will find their bliss on Coney Island Beach & Boardwalk, a celebrated and popular attraction since post-Civil War. Propose marriage after noshing on a famous hotdog at Nathan’s Famous, as you sink your feet into the 3 miles of beach bordering the boardwalk, or at the apex of the Coney Island Cyclone—a historic, wooden rollercoaster—if you and your honey are adrenaline junkies. (Just don’t bring the ring on the ride.) 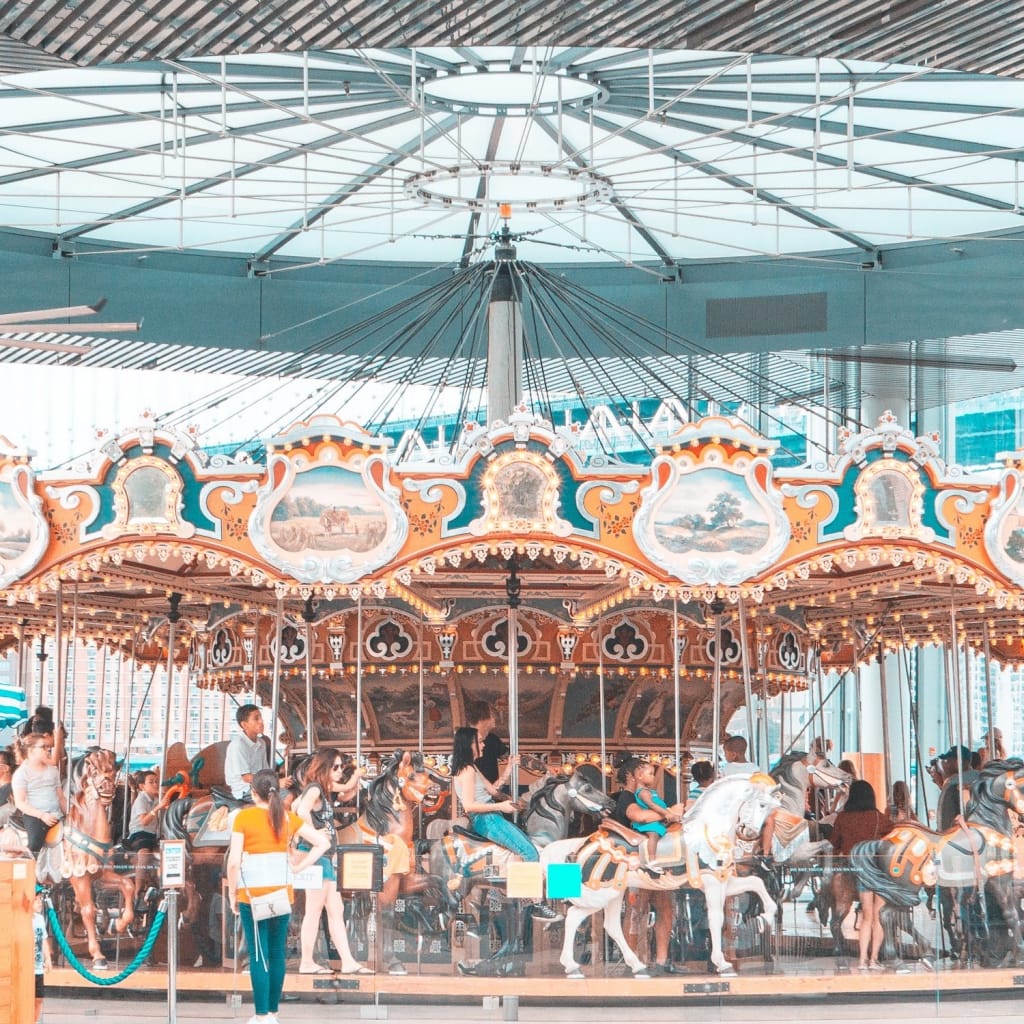 Infuse your proposal with a dose of joyful whimsy on Jane’s Carousel in Brooklyn Bridge Park, located on the East River. An antique carousel that was built in 1922 and later restored, it’s housed in a glass pavilion designed by Pritzker-prize winning architect Jean Nouvel. While this attraction is lovely during the day, the time to propose is at night when the ride’s lights cast an enchanting glow on 48 carved horses and 2 chariots. 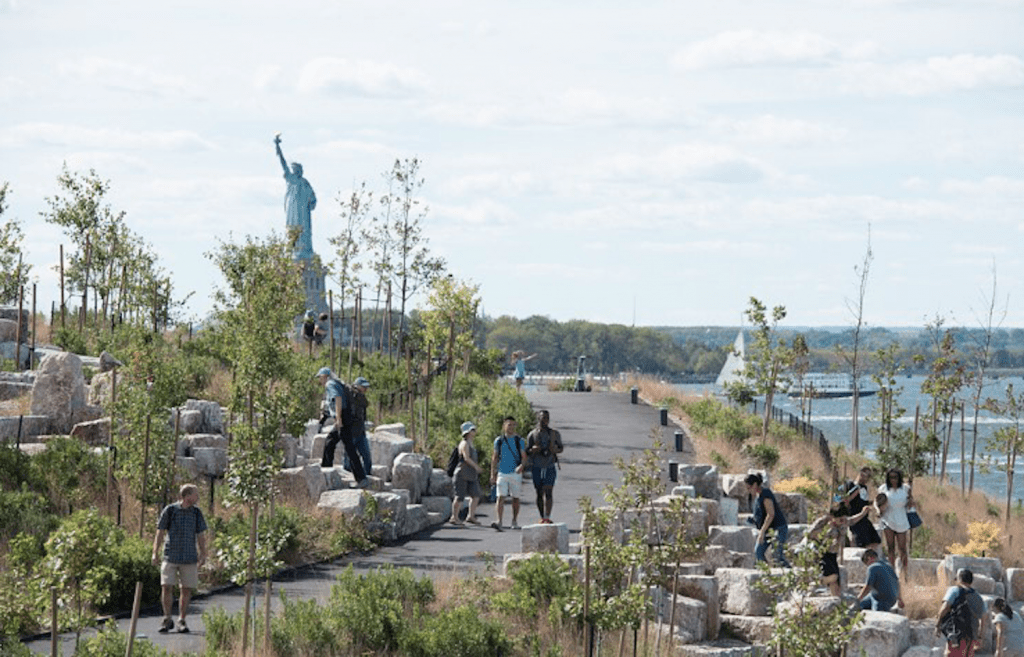 A unique, 172-acre island shockingly located only 800 yards from Lower Manhattan, Governors Island is a fantasyland of unfettered nature, innovation, and culture and one of the best places to propose in New York City. There are many prime pockets for proposals on the island, but we think the Hills is the optimal space to drop those special four words, as it offers spectacular views of the Statue of Liberty and New York Harbor. 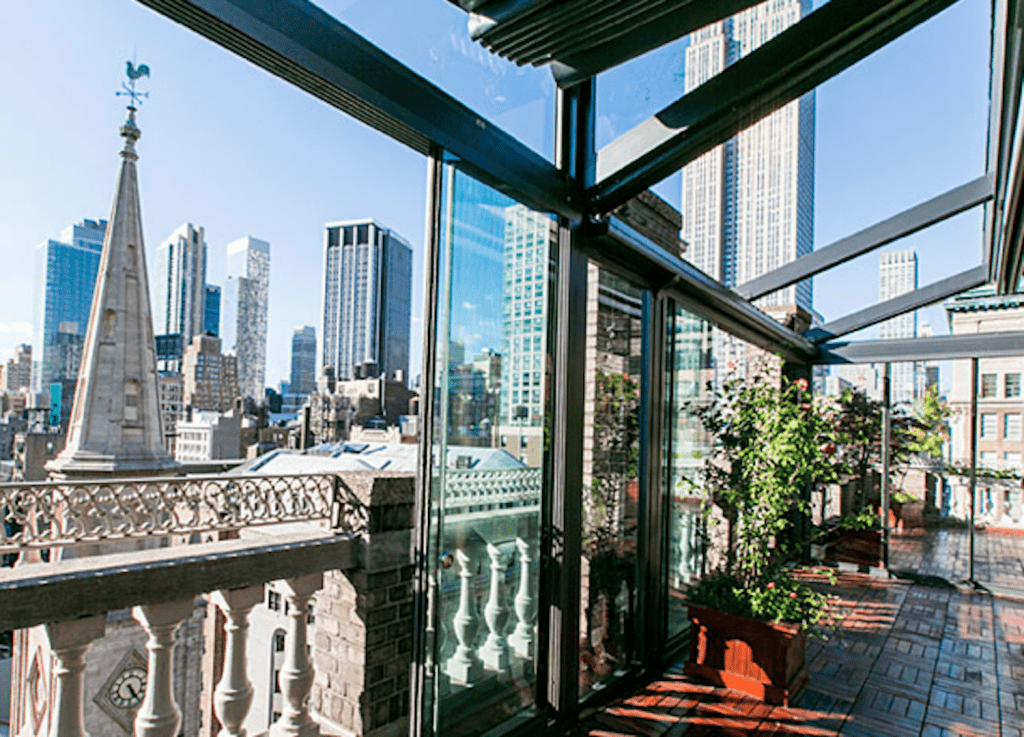 With the Empire State Building as its backdrop and 360-degree views of Midtown, the gorgeous venue of Midtown Loft & Terrace is “New York” through and through. The 4,400 square-foot terrace features a landscaped garden, mahogany decking, brick walls, and natural lighting, making it an ultimate setting for a lavish proposal replete with ample roses, candles, and maybe even a string quartet. If you’re crafting this mega-proposal in the colder months, Midtown Loft has an indoor space that emanates sophistication with copper windows, antique copper light fixtures, and a fireplace. 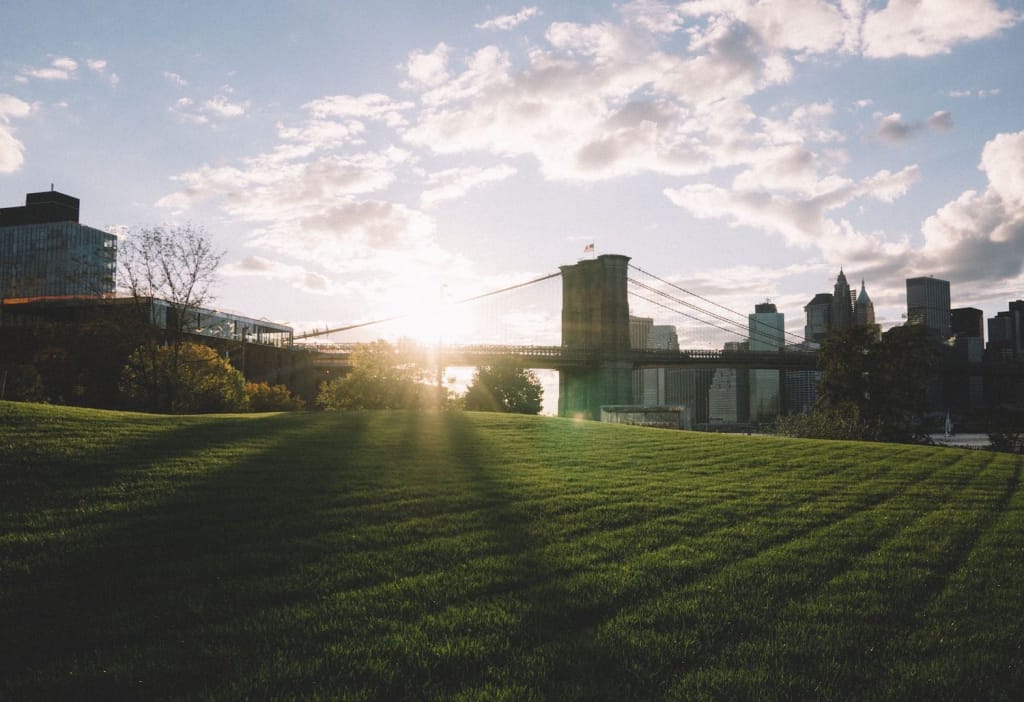 Plan to take a stroll at dusk in the elevated Brooklyn Bridge Park. Then, when your partner is distracted by the radiant sunset, assume your position in one of the best places to propose in New York City. Come prepared with snacks, drinks, and a blanket so you can stay after the sun sets and fantasize about your dream wedding while soaking in the evening splendor of the Brooklyn Bridge. 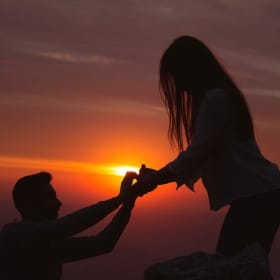 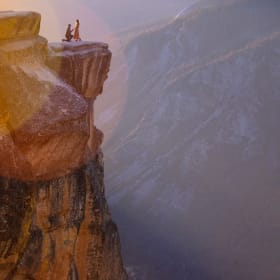 The Best Places to Propose in the US 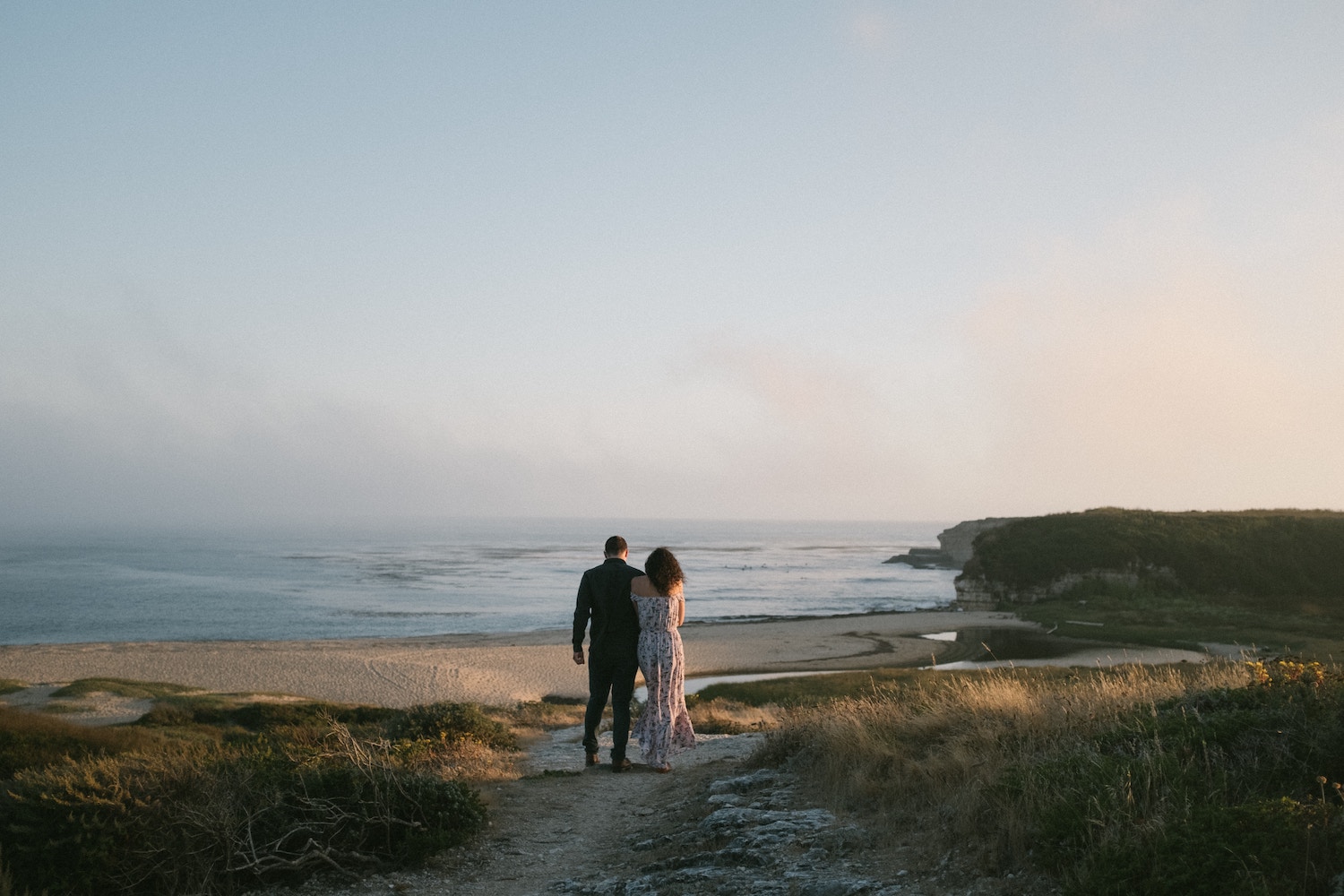 The Top 10 Best Places to Propose in California
0
FacebookTwitterPinterestEmail

Bailey Gaddis is a travel writer at IntrepidTravelTribe.com and author of Feng Shui Mommy: Creating Balance and Harmony for Blissful Pregnancy, Childbirth, and Motherhood. She is also a regular contributor to media outlets including Huffington Post, Flight Network, TRVL, Disney’s Babble, Working Mother, Pregnancy & Newborn, Cosmopolitan, Redbook, Woman’s Day, and others. She lives in Ojai, California with her husband and son. You can find Bailey on Facebook, Instagram, Twitter, Pinterest and YouTube!

The 5 Best Places to Propose in Montreal