Ryan and Alex met at work, RTP Company – a plastic manufacturing company in Winona, Minnesota. Alex’s boss was giving her a tour around the manufacturing factory and when they entered the R&D Lab, Ryan and Alex spotted each other through thick, goofy safety goggles. They were introduced and Alex remembers thinking, “Wow this guy is cute. This is the last thing I was expecting here… in a plastics factory… in rural Minnesota.” Since Alex was new to Minnesota, Ryan (so generously) took her under his wing and basically adopted her into his friend group. They were best friends for a year before he finally shared his feelings with her. We asked Alex to tell us about their courtship, the proposal, and what she’s loving about wedding planning.

How long have you and Ryan been together?

We have been together since September 17, 2011. Although there was a lot of unspoken attraction and we were close friends, we never spoke about it for multiple reasons. Firstly, we were coworkers for the majority of the year although Ryan left RTP Company in the spring of 2011. S0, the main reason was that my job in Minnesota was temporary as I was relocating for a 3-year contract to our Shanghai, China factory. Ryan had only ever been out of the country once – and just that year to Mexico – so any future I had envisioned with Ryan as my secret crush was tenuous at best.

Just a few months out from my departure date, Ryan finally came clean and shared his feelings for me. It was a beautifully romantic and starry night as he told me on the dock at his family’s cabin in central Minnesota. We started dating although the big elephant in the room remained – what was going to happen when I moved to China? After my move, Ryan scheduled a visit to China where we had a whirlwind few weeks before he decided to move to Shanghai to be with me. He began working with his company to relocate him to their own Shanghai facility. Luckily they agreed! 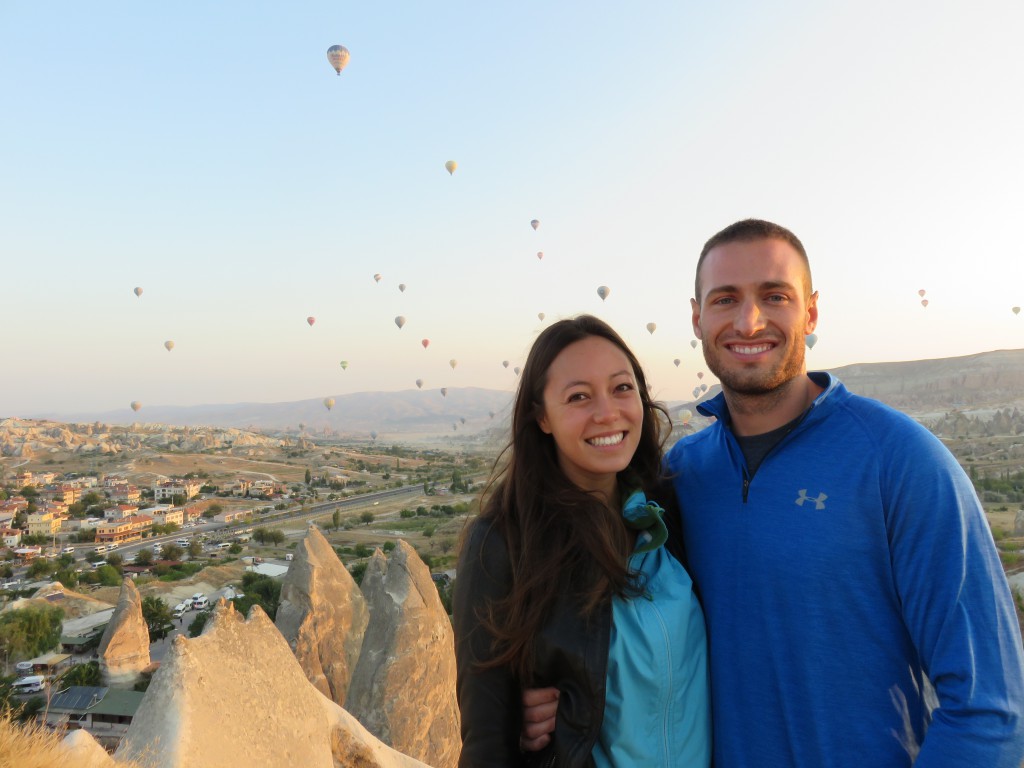 Ryan moved to China about one year later and we spent the next two years working and of course traveling extensively through Asia – top sites including the temples of Bagan in Myanmar, visiting Mt. Everest Base Camp in Tibet, swimming with whale sharks in the Philippines, staying with local tribes on a motorcycle tour of Vietnam, and spelunking down the largest cave system in the world at the time in the deep jungles of Borneo in Malaysia.

After my three year contract was up, Ryan wanted to head back to the US. I asked my company to relocate me with a management position (good bye, engineering!) and was placed at our Fort Worth, Texas facility. Once again, Ryan went back to his own company and asked to move down to Texas. Ever accommodating, they agreed again! Now back in the US, Ryan cooked up the idea to propose….

It was Saturday, February 27, 2016. I flew back to my hometown of Boston for a business trip the following week. Although disappointed that Ryan couldn’t join the last minute trip, I happily met up with my parents, Terry, and Randy for some Boston shopping and dining. I also planned to see my college best friend, Anamika. The thing was, Anamika frustratingly kept delaying our meet up time. Finally, Anamika asked me to meet her on the iconic bridge in Boston Public Garden – but alone, as she was stressed from school and didn’t want to be around people. I, unnerved, left my parents and ran to the decorative little bridge over Frog Pond. However, Anamika wasn’t there. Instead, stood Ryan. 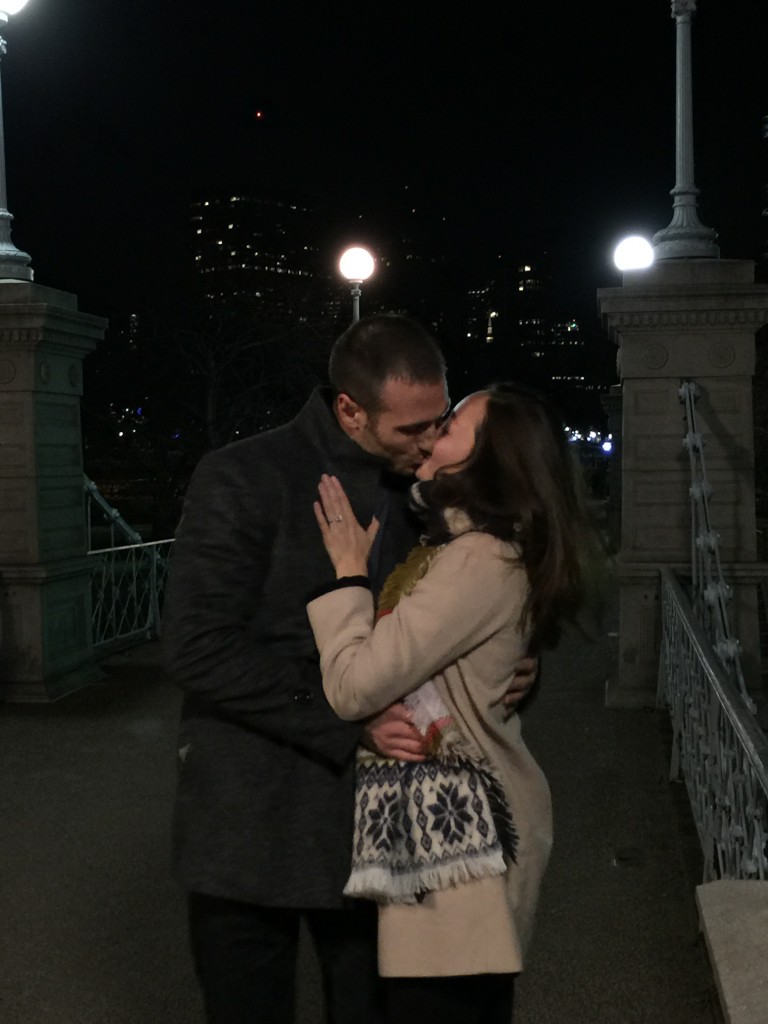 Unbeknownst to me, Ryan had caught the flight after me from Dallas to Boston. He had worked for weeks orchestrating the sunset proposal with the help of Terry, Randy, and Anamika. The problem was, Ryan’s flight was delayed several hours and his flight didn’t land until after dark! Stressed and in a hurry, Ryan and his seat companions convinced the stewardess to let him off the plane first in order to make his “flash mob” proposal—which they used as an excuse to convey how time sensitive his plan was! The stewardess fully believed them and acquiesced so that Ryan was the first one at the cabin door. While waiting for the door to open, the stewardess made an announcement over the loud speaker to the whole plane, “Everyone give this young man a round of applause. He’s going to propose to his girlfriend… with a FLASH MOB!” Ryan looked back at a sea of applause, all 40 aisles down the plane!

Of course, the rest is history! I said, “Yes!” and Ryan brought me to the Four Seasons Hotel restaurant where Terry, Randy, and Anamika were all waiting with champagne and cake!

My favorite experience has definitely been wedding dress shopping! I was able to visit my only other sibling, my older sister Anita who lives in Hong Kong, and try on ~30 dresses with her to get some ideas. Since my parents live in Boston, I had my mom fly down to Dallas where we saw another 20 or so dresses – but of course having some glasses of champagne the whole time! It’s so fun to indulge like that and it was important for me to share the experience with my two top girls – my mom and sister! And yes, after ALL of these dresses I selected what was probably dress #45! It can be tiring to try on all of the dresses but it was so much fun to spend time with the people I love most and discover together what I would wear on my wedding day!

Fortunately, Ryan and I have a 19 month engagement so things have been leisurely so far. One way to keep us sane is to have a designated time for wedding planning – for us, at our favorite coffee shop on Sunday afternoons! If I didn’t have this time set aside, I think that planning could easily take over my nights and work days. Probably, I would drive Ryan crazy too if all I spoke about was the wedding! 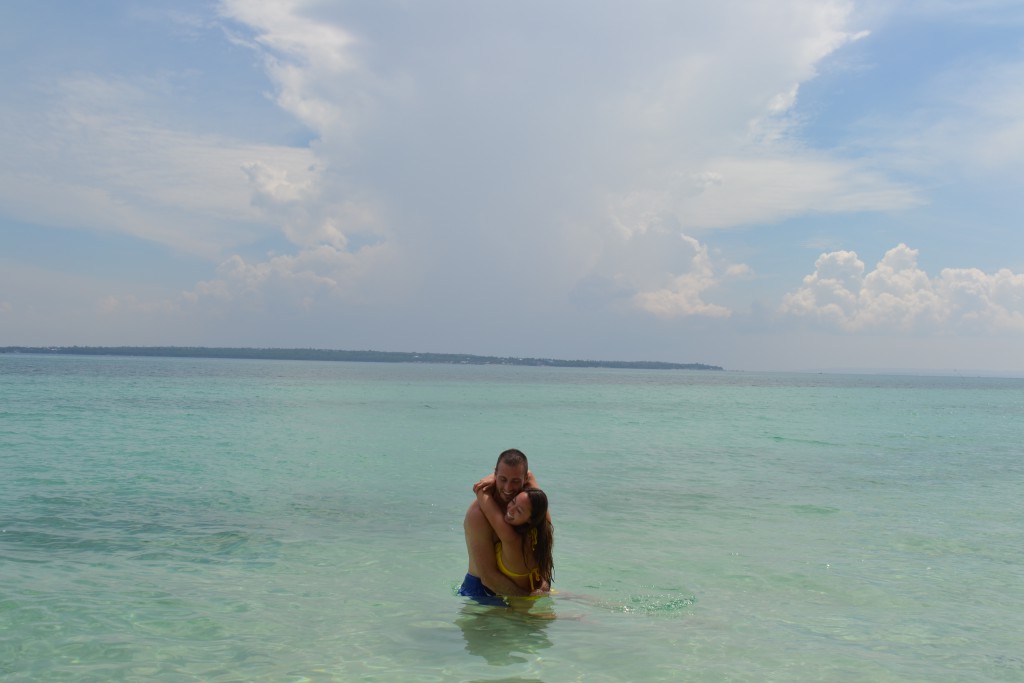 Joy is SO easy to use! In fact, Ryan and I finished our site so easily and quickly that we could put the website address on our Save the Dates – something that was really important for me since we have a destination wedding for all guests! I love that any page you could possibly need is already set up for you; all you have to do is fill in the blanks! Finally, and this was important for me, I loved the url address. www.withjoy.com/DavisAndGleason nice, short, and sweet. Some other sites will give you a very long website address unless you pay a fee. Thank you, Joy!

To me, joy can be found in every aspect of life – big or small – you just have to look for and be open to it. Having a positive and joyous attitude can change your day and touch those around you. Once you have that, then your joy can last forever.