It is a long and unique story but lets just say we like to think destiny had something to do with it! It all started one night my little sister Daniella photo-bombed a picture that Jose had asked a stranger to take of his crew at a concert. After the picture was taken, everyone shared some laughs but ultimately ended up going their separate ways.

A few months later, by pure coincidence, Daniella ran into one of the boys who was with Jose that night. From there they became friends, started hanging out and eventually Daniella introduced me to Jose at one of her birthday parties. The funny thing about the whole situation is that Jose had already spotted me on Facebook (Tinder didn’t exist back then, guys!) months before before meeting Daniella or knowing she was my sister… and he remembers thinking it would be cool if he could meet me one day….

How long have you been together?

We have been together around 4 years at this point.

He proposed October of 2016 in Denver, Colorado. I was there for work the entire week and he expressed interest in meeting up with me so we could spend the weekend together in a new city (it also coincided with the date we started dating). The original plan was that we would meet on Friday. As it turns out, he had something else in mind.

On Thursday morning, I wake up to a series of texts from him indicating he had planned a special scavenger hunt for me (Jose is quite the romantic and knows how much I love surprises). Over the course of the day he had me running from one clue to the next—some were planted at the hotel, others hidden at Sushi restaurants. He even got the security guy at my company’s HQ to get in on the fun. All the while, I had no idea how he was pulling off the scavenger hunt of the century. He was supposed to be in Virginia still! 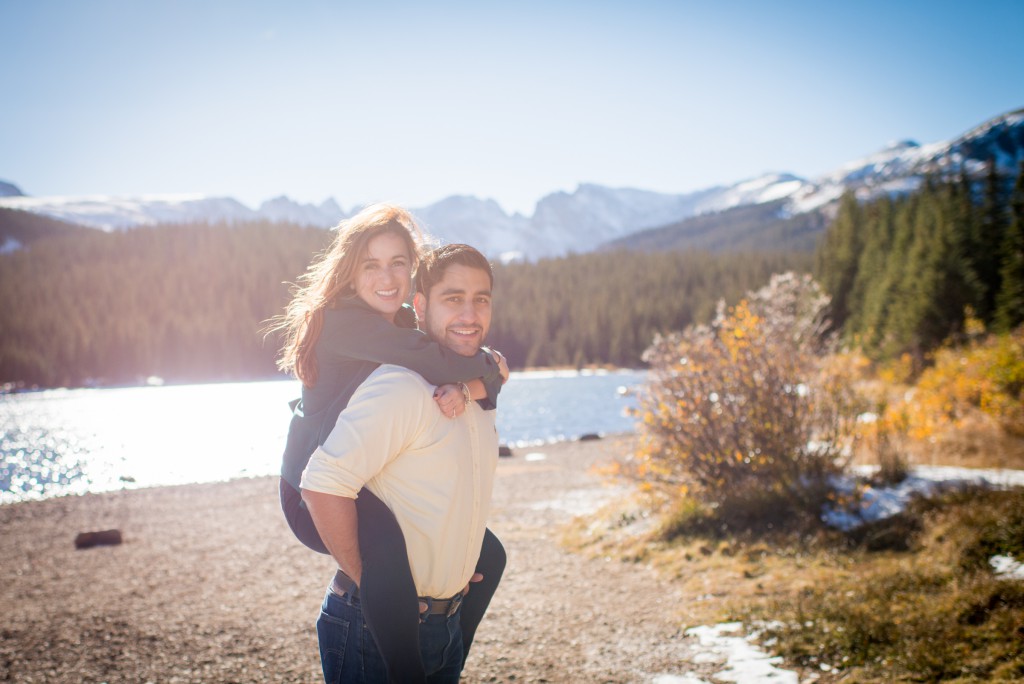 One of the last stops of the hunt was at a spa. He had arranged a mani/pedi for me—and at that point I really started to get butterflies. Was he in Denver already? Was he going to pop the question that night? What color manicure goes well with an engagement ring? All of these questions were swirling around in my head.

When I got back to the hotel the final clue asked that I visit the restaurant downstairs. My heart was pounding. I thought for a fact he would be there waiting with flowers. Instead, the hostess handed me a lovely wooden box that had our initials carved on the outside. Inside, pictures of us throughout the years. I immediately called him and demanded an answer… Where are you!?!?!

He tried to trick me my sending me a picture of him and his brother at a shop in DC. I recognized the venue and thus accepted that he had managed to pull this whole day off remotely after all. As I sat in the hotel lobby and let the whole experience sink in, a very nicely dressed man sat next to me and asked, “Is this seat taken?”… It was Jose.

As you can tell from our engagement pictures Jose DID NOT propose that night. Oh no… this man had more surprises up his sleeve. He tricked me into thinking it wasn’t happening. The next day, he started acting weird and asked me to dress up to go to “a restaurant located near the mountains.” I started getting excited again, but couldn’t really tell if he was bluffing or not. I decided to go with the flow and followed his lead. Wearing high heels to the mountain made no sense whatsoever to me, but he insisted so much that I didn’t really feel like arguing.

While just the thought of my wedding day and everything that comes along with it fills me with happiness and anticipation, I know that true joy is something more enduring….

We drove for about an hour and arrived at a beautiful place called Lake Brainard. There was still snow on the ground from the night before. I asked where the so-called restaurant was and he dodged the question. He mentioned this was just a pit-stop before we went to eat (we were in the middle of nowhere mind you without a shop in sight).

So I continued to follow along. We walked in the snow all the way to the edge of the lake. The view was gorgeous yet my toes were freezing! We had a few laughs, and we were both getting nervous. I turned around and noticed a few boys walking past us quickly and sharing a few suspicious looks. On the other side of the lake, a photographer was taking pictures of the scene and some birds (or so it seemed).

Amid our nervous laughter, I could tell Jose was ready to say something important. He pulled out a piece of paper and asked me to pay attention to something he had to tell me. I burst out laughing! I was so nervous! I didn’t let him finish his speech and instead asked him what he was doing. “What do you think I am trying to do!” he exclaimed. 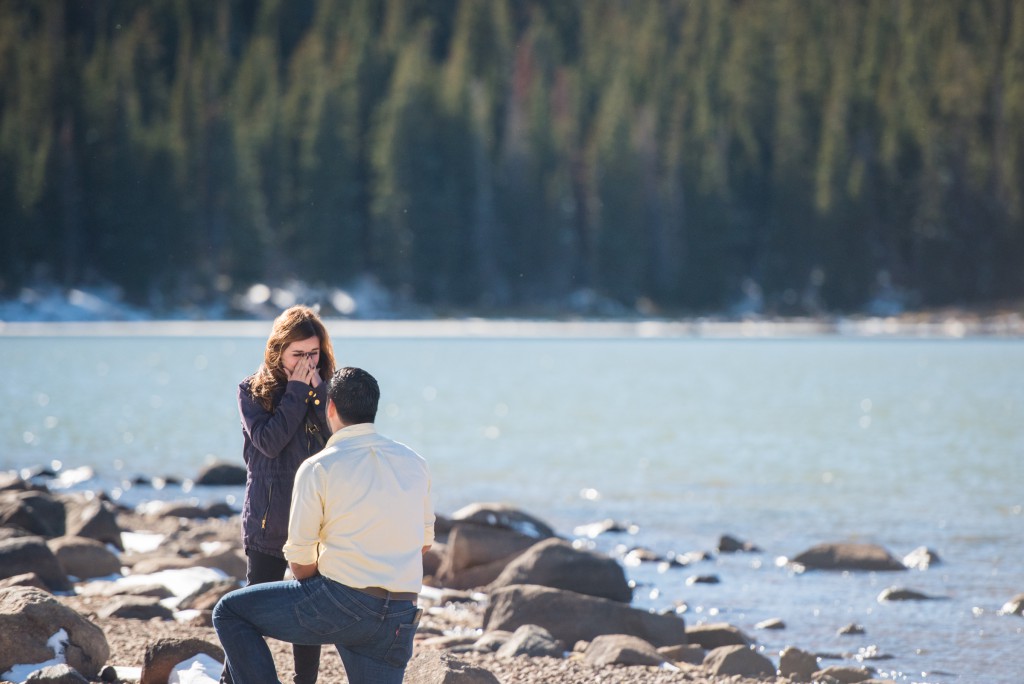 He got down on one knee, half laughing, half crying and that is when the photographer who was busy focusing on the birds before suddenly turned around and started snapping pictures of the proposal. I said I do…and it turned out to be the best day of our lives.

I didn’t realize wedding planning would be such a great excuse to spend more time with my four sisters and closest friends. I love how everyone has come together to support me and help me plan out the details of the event. Dress-shopping has been super fun too! Although when you have so many beautiful, assertive & outspoken women in your life it gets REALLY hard to reach a consensus and say “yes to the dress.”

I try to remind myself of the reasons we are celebrating to begin with. The point should never be to get stressed out. We are trying to honor a special moment, a wonderful relationship. It is meant to be positive. When meditating around this concept isn’t enough, I try to hit my local OrangeTheory class or go dancing… that always does the trick! 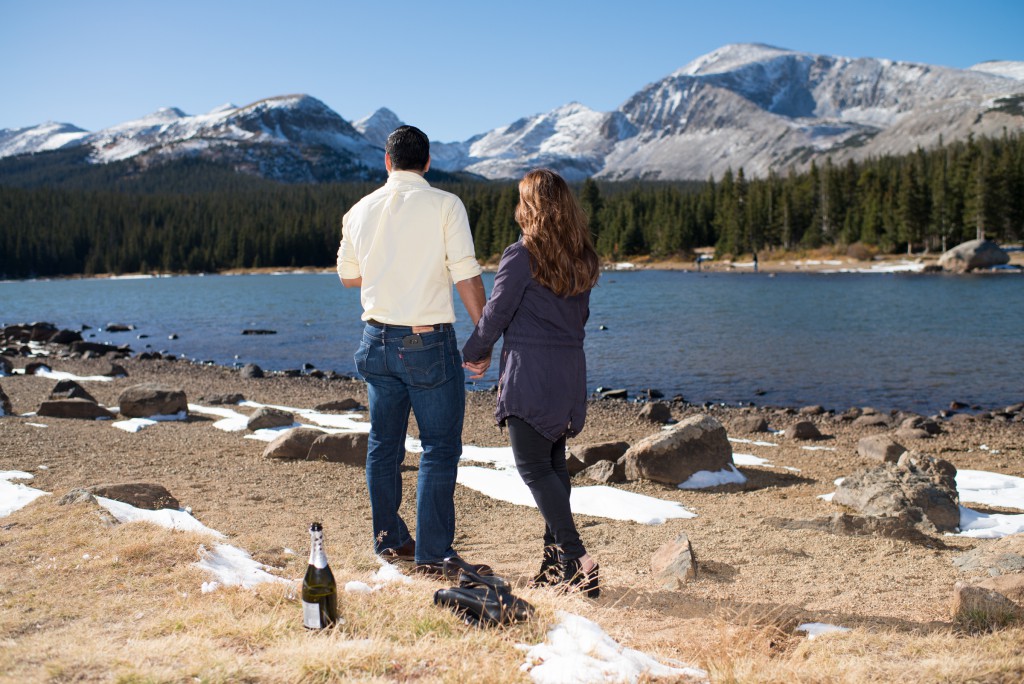 I realized I was falling behind schedule on the wedding website front, so I decided to read a few blogs and get an idea for what services to use. Joy was listed as one of the newer, cooler, less expensive options so I decided to check it out! I must say I was really impressed by the value prop and their own company website. I loved how they had an answer to the question “How do we make money?” as that was one of the first things I asked myself when I was considering their services!

I am still a relatively new user, but so far I love how easy it is to set-up and how clean and modern the look and feel of the site is once you start putting some time into customizing your pages. The fact that you can have everything in one place was also a huge draw for me. I love how I can multitask and use it as a way of organizing my RSVPs as well as showcasing my wedding party, highlighting the registry, etc.

We’ve gotten so much great feedback from friends and family around the Q&A page as well as the Travel section, so I would recommend people spend time really playing around with these and adding the right content before sharing the site. We are doing a destination wedding so folks have a ton of concerns around where to stay, when to get there, what to bring, etc. The page has allowed us to address some of those questions upfront and give our guests an opportunity to ask us additional ones with the click of a button!

One more thing I would say… the team at Joy is fantastic. I am really impressed by how responsive they are so don’t be scared to leverage that. I had one minor concern pop-up the night before I was planning on sharing my site with friends and family and I reached out to the team via their live chat application and also Twitter. The response was almost immediate and not to mention very personable. I felt like I was talking to someone who was truly invested in the success of my website. You can tell they take pride in their work and want users to get a ton of value out of it!

While just the thought of my wedding day and everything that comes along with it fills me with happiness and anticipation, I know that true joy is something more enduring and at times more laid-back than that. Joy is what I feel everyday when my fiance makes me a cappuccino and asks me if I need help with something. Joy is sitting in our living room watching soccer games together while we spoil our two dogs, Mila and Lucas, with hugs and belly rubs. Joy is something I hope we never lose in our relationship and are grateful for everyday. 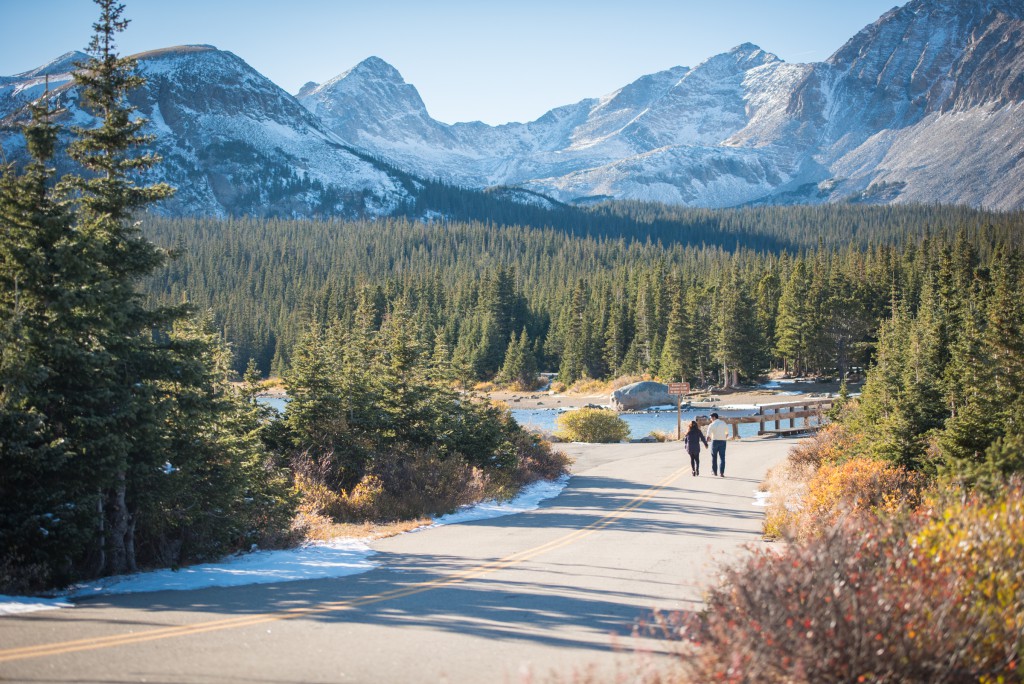