Stephanie and Gino’s story began on January 9th, 2016, when they both attended an event held in San Diego by a ministry called Synced Culture. Stephanie didn’t know much about the event and went to support her friend, Karissa, who was speaking. Gino took over for another pastor just a few days prior to the event, because he felt that Gino should preach instead. They crossed paths a few times and each time, Stephanie felt an overwhelming urge that she needed to speak to him. She did. And the rest, as they say, is history.

Tell us a bit more about how you met.

So once the event ended, I walked up and thanked him for everything that he had shared (when he tells the story, he reminds me that he saw me start to walk up to him and I saw that he was speaking to someone so I made a quick turn into the bathroom instead). We spoke for a little bit, he encouraged me in what I was going through at the time, told me he would be praying for me and although he said he would see me at the next quarterly event, I knew in my heart that it wouldn’t be long before I would see this man with those inviting brown eyes and impressive beard. 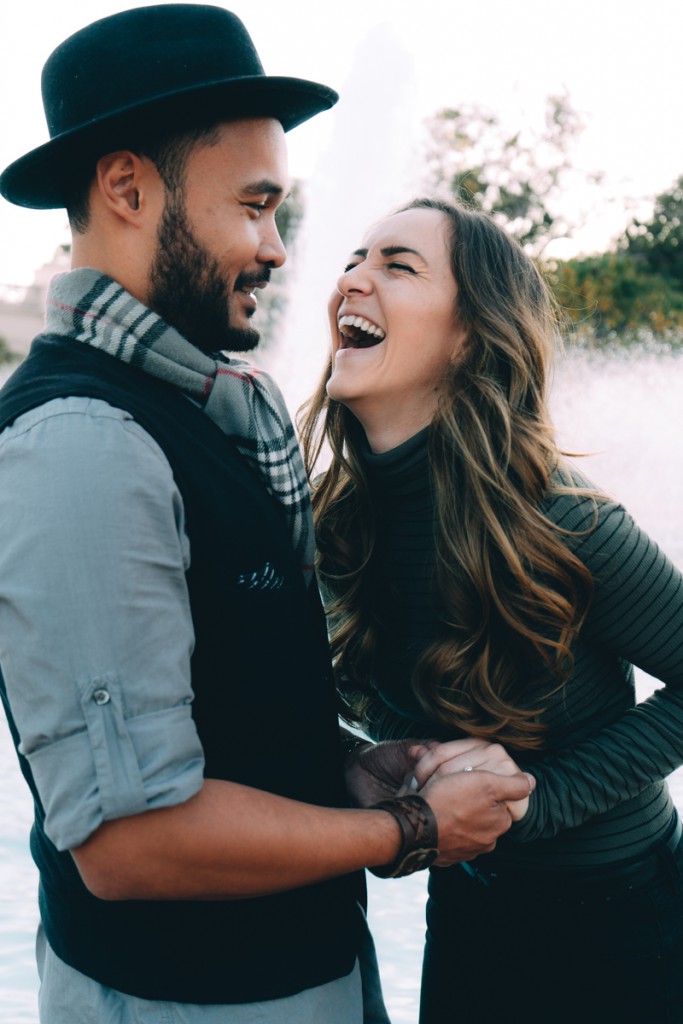 Long story short: I reached out after a week of prayer, we met up for coffee a week after that, we developed a deep and intentional friendship, and eventually Gino asked me to start dating a couple months after that at a beautiful fountain at Balboa Park. (This place will come back around, so stay tuned). We fell deeply in love…unlike anything we have ever known.

Gino had asked two friends of ours (a couple who had been dating for about the same amount of time) a couple months prior to the big day if they would be okay with playing a major part in his proposal. This would involve the guy, JB, pretending that he was going to propose to his girlfriend and reaching out to me to be one of the photographers to capture the moment. They both agreed to this plan and were excited to be a part of this special day.

Right before the holidays, JB reached out to me and shared his “news,” to which I responded with excitement and joy for him! He then asked if I would be the primary photographer that would take photos of their “special moment” at the final location. He presented it as a whole day event in which multiple photographers, who are all friends of ours, would get together and go on a photowalk at Balboa Park in San Diego (remember that location from earlier?). It would be a day of creating and enjoying one another’s company, culminating with him “proposing” to his girlfriend.

I was overjoyed to be a part of this day and after the holidays were over and Gino and I were back home in San Diego after visiting family in the Bay Area, I prepared for this exciting day. There had been many group texts and a couple phone calls to go over all of the details, but little did I know, there were separate group texts, meetings, and phone calls that I had no idea about until later.

On Saturday, January 7, 2017, my friend Ashlyn came down from LA. She is a photographer as well and she had asked if I had time to hang out that weekend and possibly shoot some photos and it triggered that I should invite her to our photo day (though I had no idea that she knew a lot more than I did and was just waiting for me to extend the invite). She did my hair that morning because it needed a quick trim, we talked about the day, she prayed with me before I left because I was very nervous to capture the special moment for JB, and then we headed over to Balboa Park. 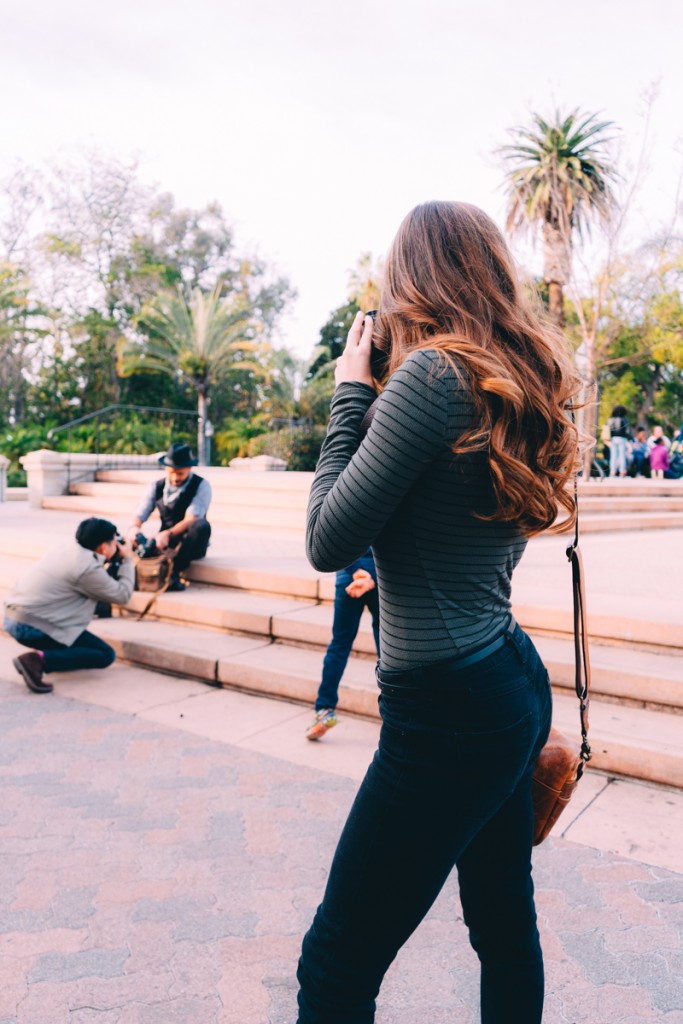 Gino met with JB that morning (I thought he was working overtime), and then he made his way over to Balboa Park along with the rest of the group. The plan was to go to three locations at Balboa Park to shoot some photos and the third location, where we would end, would be the fountain (there it is again, our special place!). When JB told me that is where “he was going to propose,” I responded with excitement about how special that location is to us and just thought that it would be awesome to catch this moment there.

As we embark on our engagement season, we realize that we are preparing for a marriage, not a wedding. Though the planning and all the details that we get to decide on are incredibly fun, we are focusing on our life together and what marriage is.

Our photowalk began and we were all having so much fun creating together, enjoying one another’s company, shooting photos, and JB, who is a videographer as well, was taking video the whole time. I spoke with JB discretely a couple times to go over the logistics of what would happen when we got to the fountain. The plan was that I would ask him and his girlfriend, Erin, if I could take some of their photos alone at the last location (they are typically camera shy). He would then proceed to take out his ring and go from there. 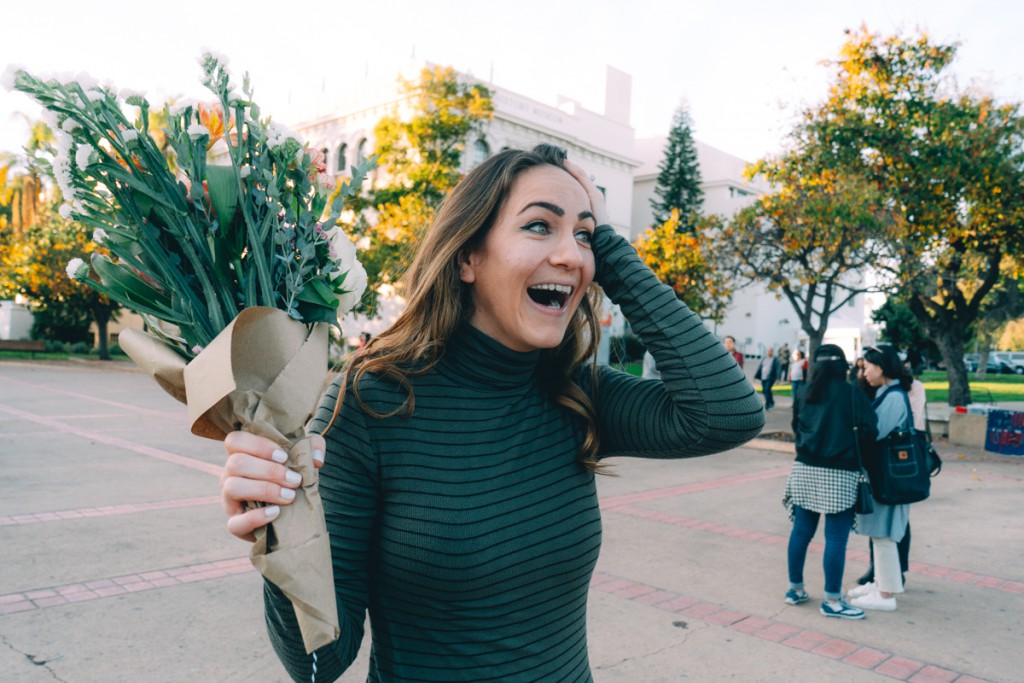 As we made our way to the fountain, we noticed that it seemed super busy over there. Gino went ahead to scout out a good location and the rest of us made our way on another route, still just enjoying the day and shooting in what had now become golden hour (the hour before sunset). We made our way to the fountain after Gino texted JB that he had a spot. I didn’t know this, but Gino was recording a video of himself on his phone that he would show me after the proposal, with the last words on the video being, “You have no idea, but I’m about to ask you to be my wife.”

We walked up to the fountain area and Erin’s friend was there to hand her a bouquet of flowers. I immediately thought “Oh no! She’s too soon, did she just ruin it?!” But things were moving quickly and I was very much focused on the task at hand. I got JB and Erin set up, and took a couple shots of them. I noticed JB was acting strange, but I thought that was normal because he was about to propose.

Then everything happened all at once….

While I was still shooting photos, JB reached in his pocket to grab the ring box and I thought, “This is it!” but in one fell swoop (that had been rehearsed), he handed the ring box to Gino as Erin gave me the bouquet of flowers and swiftly took the camera off my neck. I looked up and Gino was in front of me, getting down on one knee. I dropped the flowers just as soon as I had gotten them, then dropped to the ground with my hands over my face, in absolute shock at how things had so suddenly turned. 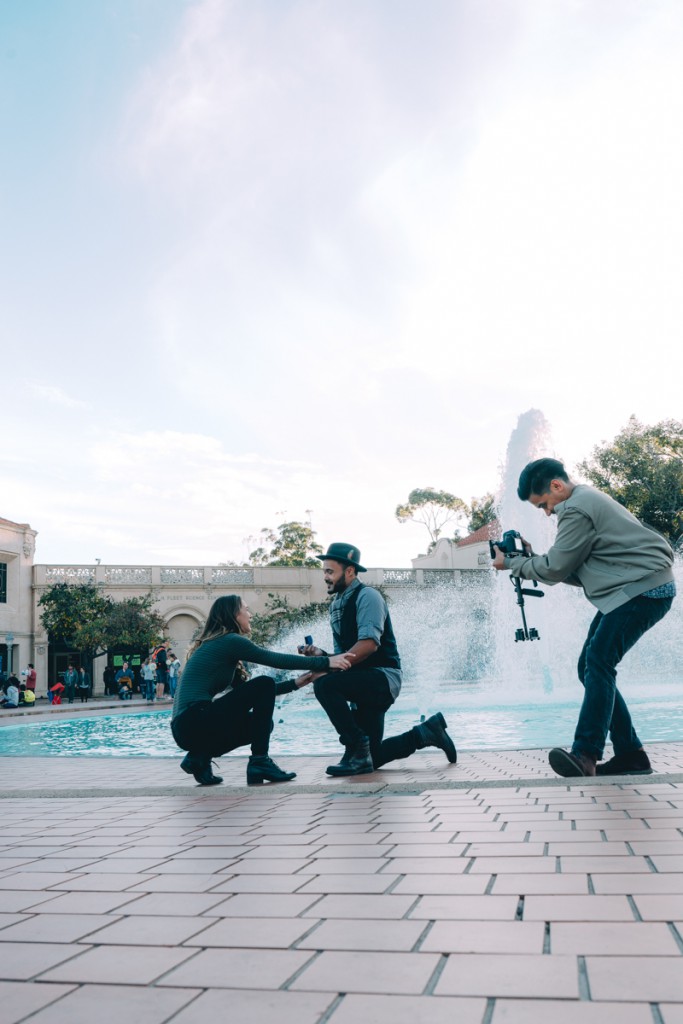 Gino called me to him and I made my way over, still down on the ground due to very shaky legs and the desire to be as close as I could to him. I grabbed his hand and cried. He smiled at me and giggled a little at my reaction… and then he asked me to be my wife. I said yes! And the entire crowd of bystanders cheered!

I got up and we embraced. I cried in his shoulder, taking in the most surreal and beautiful moment of our lives thus far, thanking God for this man and this moment. Then we turned and saw all of our friends who had captured the moment, including JB who had been recording it all and would later give us a beautifully put together video of the entire day, which is something we will be forever grateful for. We celebrated with our friends, took some photos, I FaceTimed my parents, and Gino and I headed to dinner at a favorite place of ours where he had dinner reservations for just us two.

Gino and Stephanie Proposal from Jbnorman on Vimeo.

And to complete the surprises, one week later Gino took me on a scavenger hunt to places that have become important and special throughout our relationship, including the exact location we first laid eyes on one another. He had clues set up and alarms set on my phone. The last place was a pizza place by where I live. We walked in, Gino said, “Gino, party of two,” and as we turned to walk to our seat, half of the restaurant erupted into cheers of “SURPRISE!” I looked up to see our loved ones, so many of them, many of whom had driven hours to be there. I cried (again) and we spent the evening celebrating with our friends and family.

My favorite experience has really been the way our family has come together to step into this journey with us. We are very blessed by our families and are absolutely loving the chance to plan this all together!!

Organization is definitely key. Also, reaching out to loved ones for suggestions and help. It’s incredible how many people are eager to share and willing to help! Also, just staying rooted in what this time is about (God communicating about Himself through our eventual union), and making intentional time to spend time with God, be with one another (without wedding talk), and just enjoy this season of being engaged. 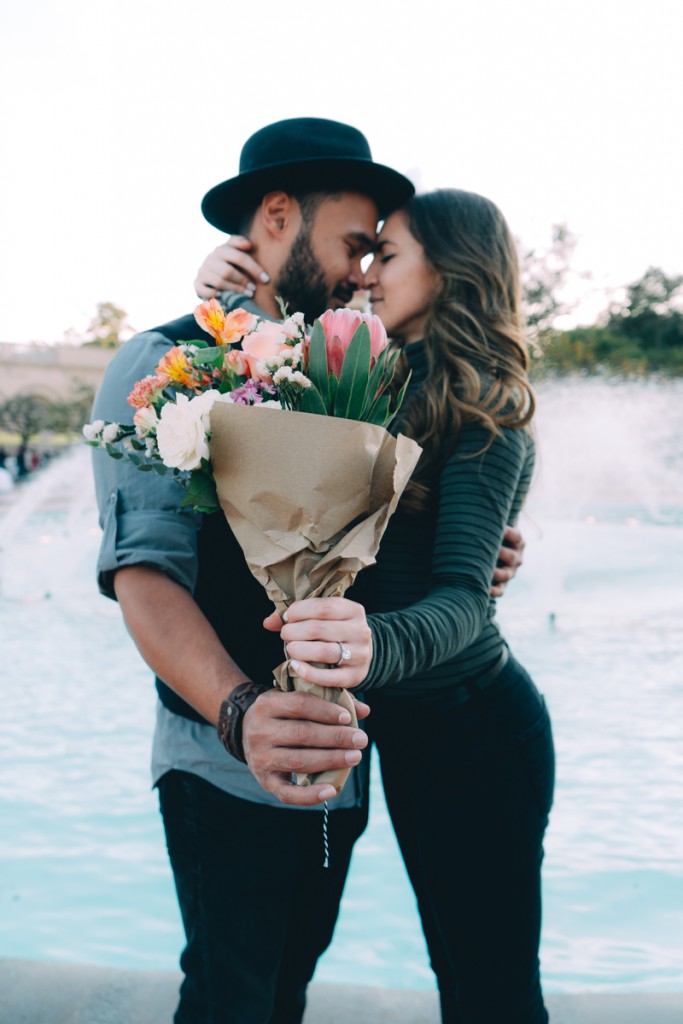 I don’t think I could just pick one. The website is so beautiful and easy to use. It connects directly to places that easily add photos, guest lists and just contains so much important and wonderful information! I also absolutely love that there is an app!! That makes it so convenient for people to check out our story, our wedding information and even add photos if they want!

I would say to utilize Joy’s wonderful staff who are easy to contact if they have any questions at all. I would also say to just play around on the site and check out all of the wonderful tools that are available to them. There’s an awesome help page that answers so many questions and thoroughly explains many procedures on the site.

As we embark on our engagement season, we realize that we are preparing for a marriage, not a wedding. Though the planning and all the details that we get to decide on are incredibly fun, we are focusing on our life together and what marriage is. We know that it won’t always be easy and we will face trials and difficulties, but as followers of Christ, we know our Joy comes from Him. So we wholeheartedly agree that we will forever be filled with Joy. 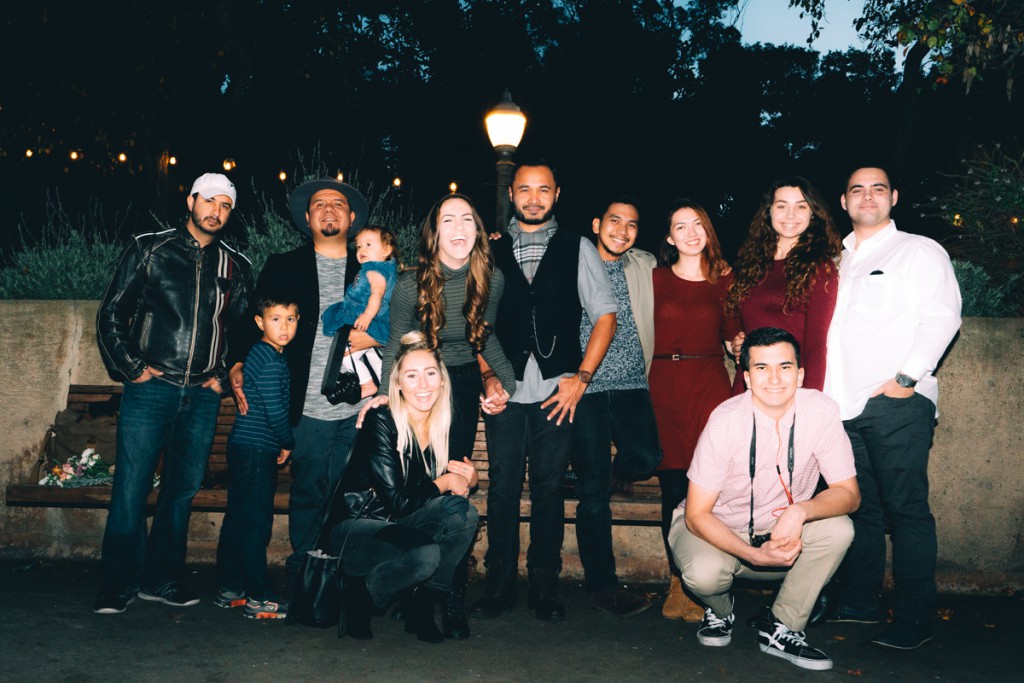