The story we used to tell people….

We met at Rumba Cafe in Columbus, Ohio — a place we both hung out at pretty regularly — and our first date was on July 4th, 2011 at Surly Girl. We were the last two people there and ended up closing the place down. We went on a few more dates and the rest was history.

Jamie and Will should have met at a place like Rumba Cafe. They were at the same place at the same time on numerous occasions, and somehow never met. Whether it was Rumba Cafe, PF Chang’s at Easton (where Will used to work and Jamie would sing/play at the blues jams on the patio), or other venues they would both frequent………they somehow never met. So where did they meet? They met online — specifically, OKCupid. They had both gotten out of long and miserable relationships, and then turned to online dating to see what was out there.

After meeting some people they didn’t spark with, some crazy people, and some people that looked nothing like their profile pictures, they were both about ready to hang it up. Jamie actually deleted her account, or so she thought, until she received an email saying she had a message on OKCupid. At first she was confused, thinking she had deleted her account, but after reading the message she was intrigued. He was smart, good looking, a musician, and it was clear that he had actually read her profile. After a few messages back and forth Will asked to meet face to face sometime soon. It was July 4th. Jamie said, “why not tonight?” So they did. 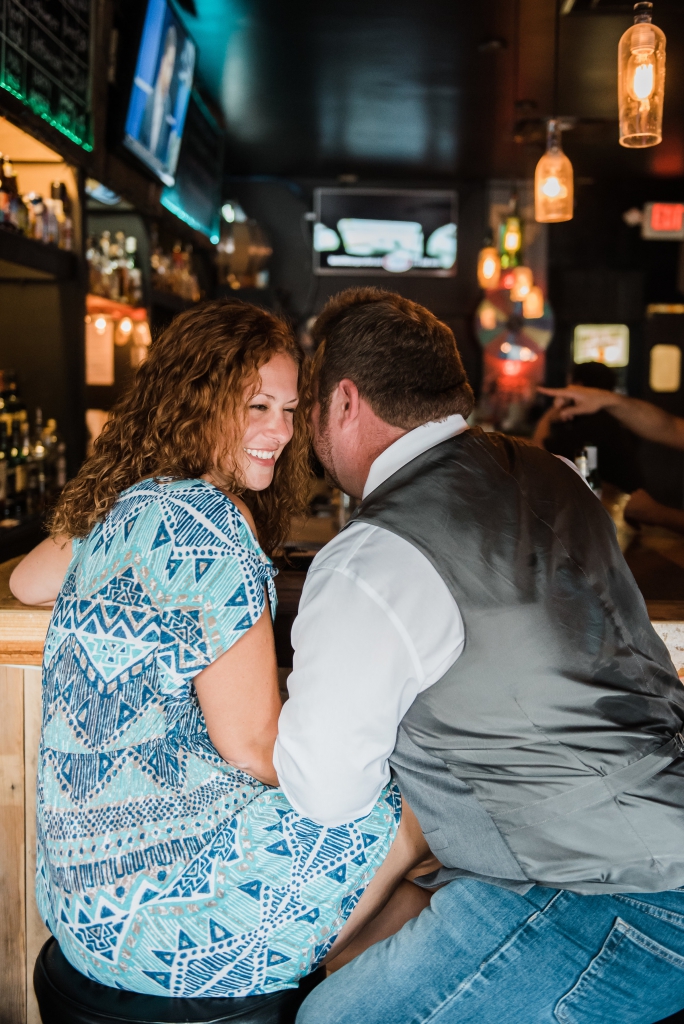 Jamie went to a friend’s party that afternoon where she hatched an escape plan with her best friend, Mary, just in case. If Will ended up to be anything other than he had advertised, or they didn’t spark, Jamie was going to text Mary and have her call with an “emergency.” Jamie and Will hit it off so much that Jamie forgot to let Mary know that everything was okay. After reassuring a panicked Mary that she had not been kidnapped, they proceeded to have a great time and close the bar down. Will walked Jamie to her car and shook her hand goodnight. Yes. You read that correctly.

The third date was what really set things in motion. Jamie had had a busy day and barely had time to shower prior to the date. She showed up with wet hair, glasses, and no makeup. That was the night that Will kissed her. After that night they were inseparable, and have been on many adventures together since, including grad school, Nashville, back to Ohio, and now South Texas.

Jamie and Will knew pretty early on that marriage was in the cards — it was just a matter of when. And because they tell each other everything, Will couldn’t completely keep the proposal a surprise. Jamie knew it would be happening during their Christmas trip to Ohio, she just didn’t know how or at what point in the trip. She figured it would probably happen when they went to Kent to visit Will’s family, because they had made plans to go out with friends that Friday night. Turns out that Will had other plans.

We find our joy in each other. We are incredibly lucky to have found each other. We never seem to run out of things to talk about, we laugh all the time, and we make each other whole. In each other we have wonderful, tangible, unbreakable, everlasting joy.

Will employed the help of friends to make sure that Jamie ended up at New Albany UMC, where they used to lead the contemporary band together. One of the band members (Nicole) had asked Jamie to come to their Thursday night rehearsal to fill in for the lead singer and then grab a drink afterwards. Jamie thought it was kind of odd to rehearse with them since she wouldn’t be at the Sunday service, but they were her friends and she wanted to see them. Regardless of not singing for the actual Sunday service, Jamie rehearsed the song list Nicole had given her while she was driving to the church. Being a musician, she didn’t want to sound bad, even if it was just a rehearsal.

When Jamie got to the church, she walked in to find Keri (the worship leader) waiting for her. They hugged and talked briefly about Texas, and then Keri told Jamie she was excited to show her a new song that the band had been working on. Jamie couldn’t really make out what they were playing through the closed doors, but it sounded good and funky. They stood at the back of the room watching the band for a moment, and then Jamie realized that the lead singer was there. She was confused, since she was supposed to be filling in for him. 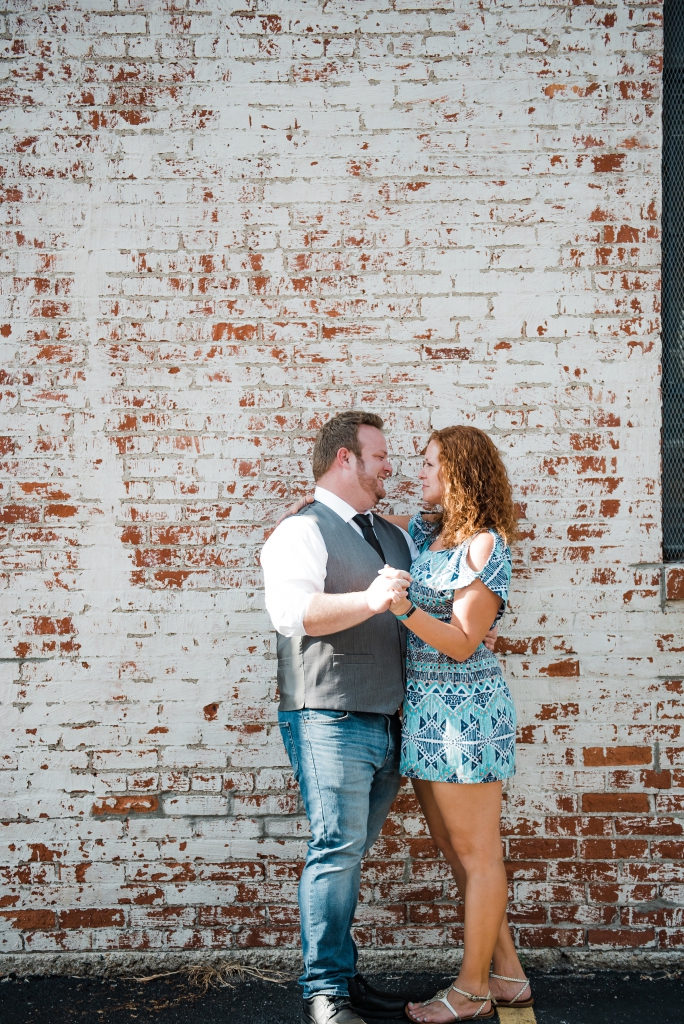 It was at that moment that the main riff of the song kicked in, and Jamie realized what was happening. They were playing Jamie and Will’s song, Al Green’s “Let’s Stay Together.” Completely caught off guard, Jamie started looking around the room for Will, but the room was fairly dark and she didn’t see him. Keri motioned for Jamie to walk to the front of the room where the band was, and Will came out from the side to meet her. He got down on one knee and said, “I have a question for you…,” and opened the ring box. He had had the ring custom made with emerald accents — Jamie’s birth stone. Obviously she said yes.

Not only had Will arranged the song for the band to play, but he made sure that all of the musicians that they had become close with while working at the church were there. Jamie’s sister and her best friends were also there waiting off to the side. Afterwards, they all went to “the bar” to celebrate — a bar across the street from where Jamie and Will used to live. It was perfect.

Our wedding date is June 23rd, 2018, so we’re still in the early stages, but we’ve actually got a lot done already! Church, reception venue, wedding band and photographer are already locked in. Our favorite part about planning the wedding is exactly that — planning. We get to plan one of the biggest days of our lives and create a wonderful celebration with our favorite people. It’s exciting! 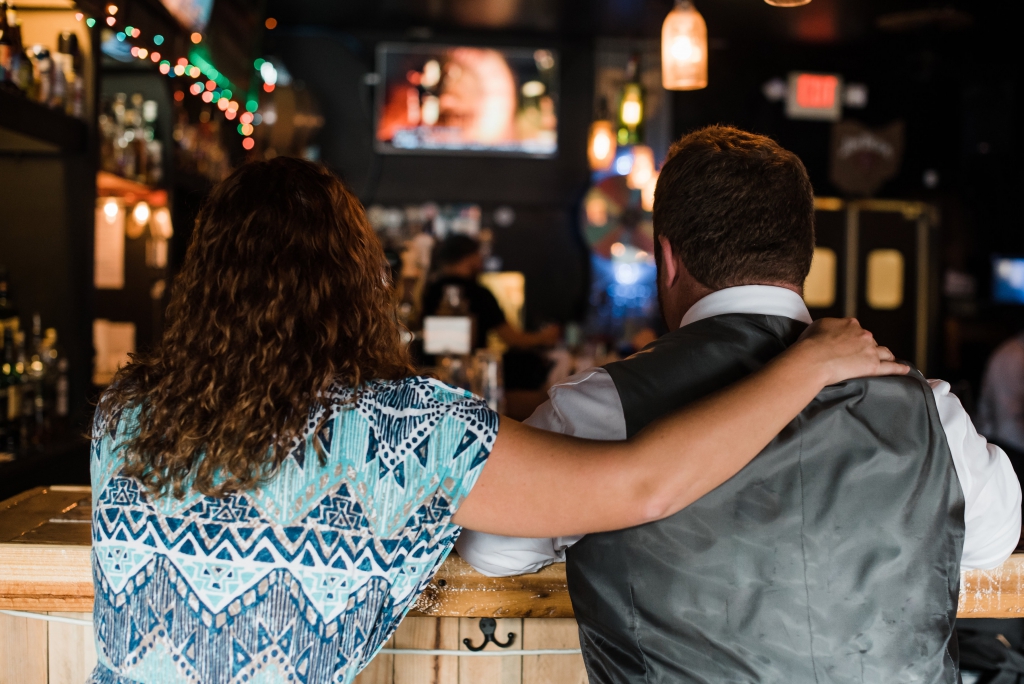 The hardest part so far has been trying to keep the guest list at a reasonable count. So trying to figure out who to cut has been kind of stressful. We stay sane by talking through it together and trying to reassure each other that not everyone will be able to come, so it will probably end up where we need it to be anyway. Wine and whiskey help too.

Jamie saw an ad on Twitter and decided to check it out. She’s so glad she did!

Being free is definitely a plus, but we really love how customizable it is. It’s such a great resource for our guests — all the information they need in one neat package.

Make it your own. Show your personality as a couple in the way that you word things. Your guests will love it. It’s not only a preview of what the big day will be like, but it’s also a wonderful way to tell your story. Remember, not everyone may have heard how you met or how the proposal happened, so knowing those things before joining you on your big day makes it all that more special for them to be there.

At the risk of sounding corny, we find our joy in each other. We are incredibly lucky to have found each other. We never seem to run out of things to talk about, we laugh all the time, and we make each other whole. In each other we have wonderful, tangible, unbreakable, everlasting joy. 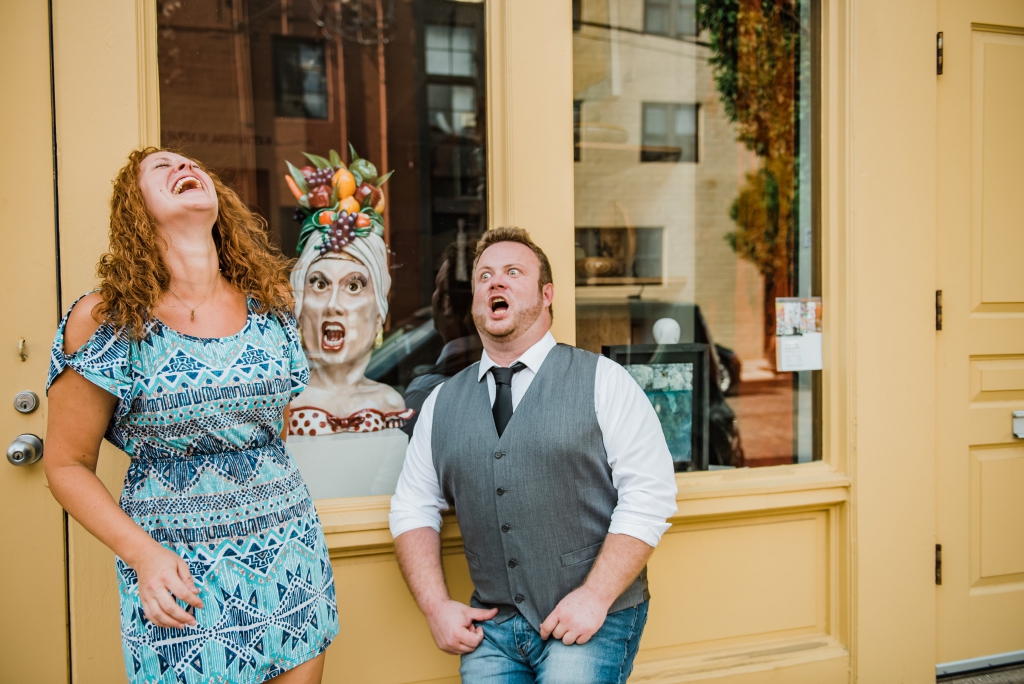